Here starts the last year of my world trip.
After traveling alone for 24 months, I had now Iulia by my side (I had met her in the Canaries just before sailing to Cuba). We had kept a strong contact through last year and decided to meet again and travel together.

The plan was to go from Colombia to Argentina where I would end my trip and return to France. Both of us spoke a little bit of Spanish and hardly knew anything about South America. Thus, we had to figure out how to travel through that continent step by step.
Actually, the first thing we encountered was a tropical fever for Iulia.

However, it did not last long and a few days later we were already on the road…
Just like I used to do, we only set a direction (south) and started walking and hitchhiking towards it.

We decided to avoid most touristic places. Basically, the more remote, the better !
On our first night, we arrived in Sonson, a beautiful village lost in the mountains.

We were quite surprised to realize that we were standing at 2500 m.
Indeed, we were just entering the northern Andes. That blew me away. Even at that height, it was still super warm !

Most people I had met had advised me never to hitchike through Colombia since it was supposed to be super dangerous. However, most of them had never hitchhiked in Colombia and some had even never been there.
We gave it a try. he road we were traveling looked easy going.

The first ride we got set the mood… Yes, we were surely going to hitchhike that country ! No doubts ! 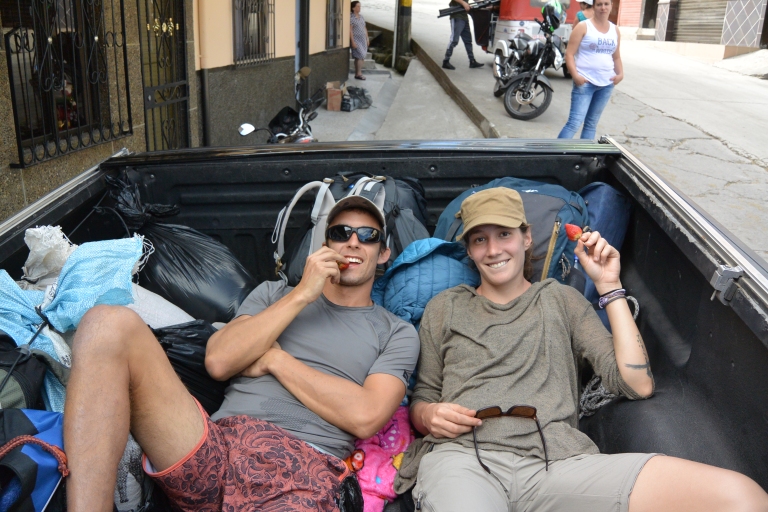 At night, like I used to do, we looked for a nice and quiet place to sleep. In that part of the country, it was not hard to find.

The constant warmth made us sweat a lot. However, nature is always balanced – the more you sweat, the more waterfalls and natural showers you encounter.

Anytime we found a trail, we hiked it. However, Colombia in that matter was complicated, as most natural parks are not really for hiking but more to protect the environment.

Even if we hitchhiked a lot, we had to try some local transports such as rural buses called Chiva !

I still haven’t figured out how the driver could go down the road so fast without crashing.

We were now entering a high altitude zone called Chiganza National Park. We wanted to hike there and discover what a 4000 m tropical landscape looked like.

It started to be cold and rainy. As we mostly slept in our tent, we asked locals if they knew a safe and dry place to sleep. Without hesitation, a nice family offered us to sleep on their roof… with a wooden oven included !

Kindness of Colombians was encountered no matter where we went. 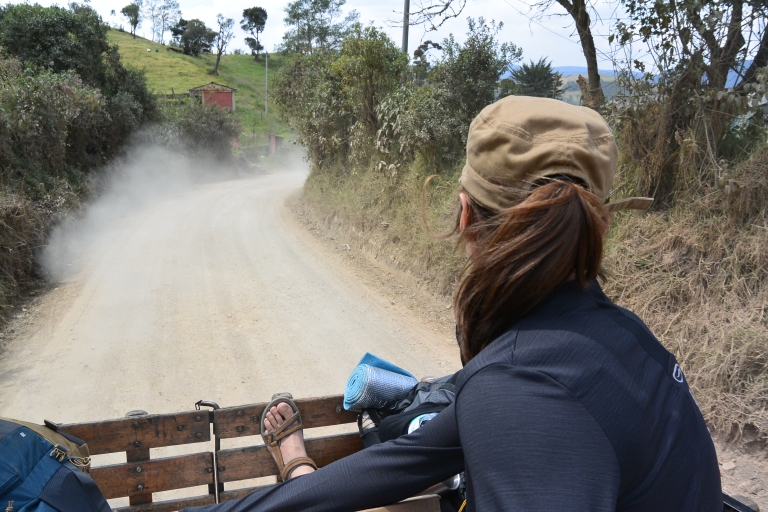 We entered the park and met locals who offered us a place to stay to make sure we would have enough energy for the upcoming hikes.

Overwhelmed by that kindness, we shared and cooked a meal to thank them.

The next morning, we started walking and we realized that we could have reached the park because it had become difficult to breathe. The lack of oxygen was the consequence of the high altitude.

Still, it was worth it. We discovered one of the most peculiar environment we could have ever imagined. 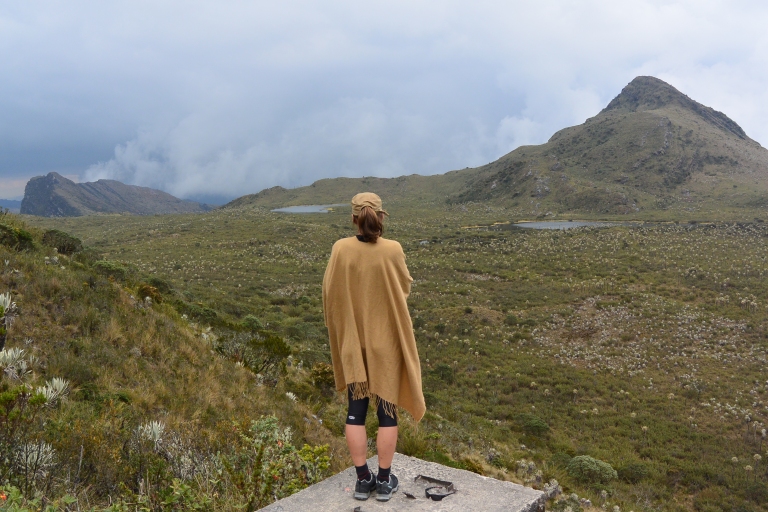 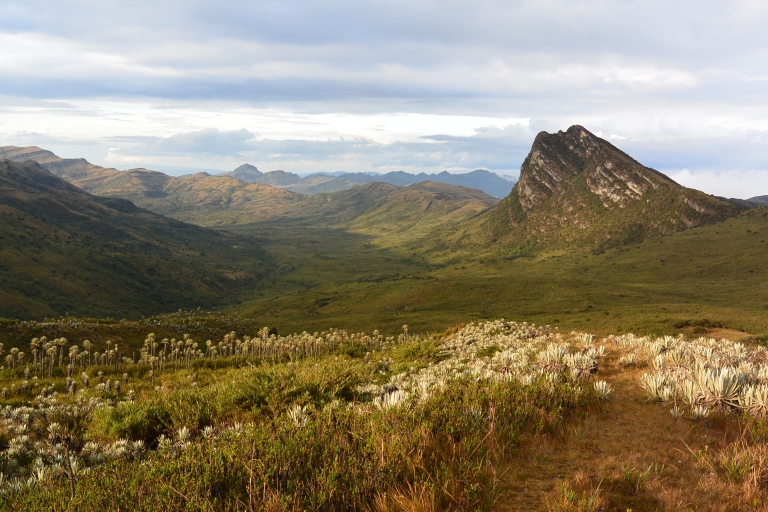 Beautiful, yes, but we soon had enough and decided to warm up. Still heading south, our next (far away) objective was the Tatacoa desert, the driest area of Colombia. The way to get there was beautiful.

Having Iulia around also changed a little bit my habits. She loved walking and discovering small villages. Thus, we decided to slow down a little bit and walk just from village to village.

We followed dirt roads (thank God google maps exist) and set up our tent around 5 pm every night. Indeed, Colombia is not that dangerous, as long as you respect basic security rules :
– Avoiding walking at night.
– Always have a place to sleep before it gets dark.

To sleep, just like I did in USA, we asked locals if we could set up our tent in their garden or their farm for one night. That provided us the security we needed.

On our way to Tatacoa desert, we went through a lot of places where there were no tourists… Safe to say, we did not go unnoticed !

As we were getting closer to the desert, the landscape changed and became warmer and more tropical.

We did not have to buy any fruits anymore… Mango trees were everywhere !

Sometimes, locals questioned what we were doing and invited us to their homes. Once again, no matter what country I was in, as long as I behaved and acted respectfully, people were super welcoming.

A few days later we left the tropical area, and got closer to the desert. 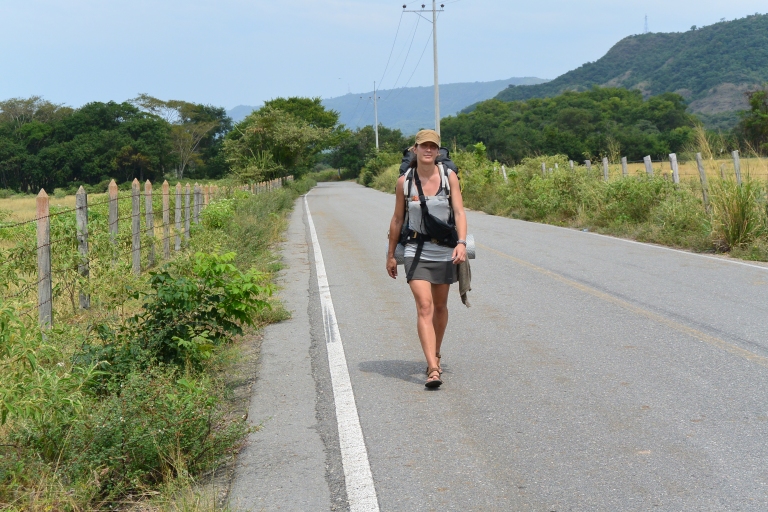 We spent a few days in a small village in Javier’s house (a nice and very peculiar local) as I got stroke by the turista (third time in that trip). Our host took care of us until I recovered. 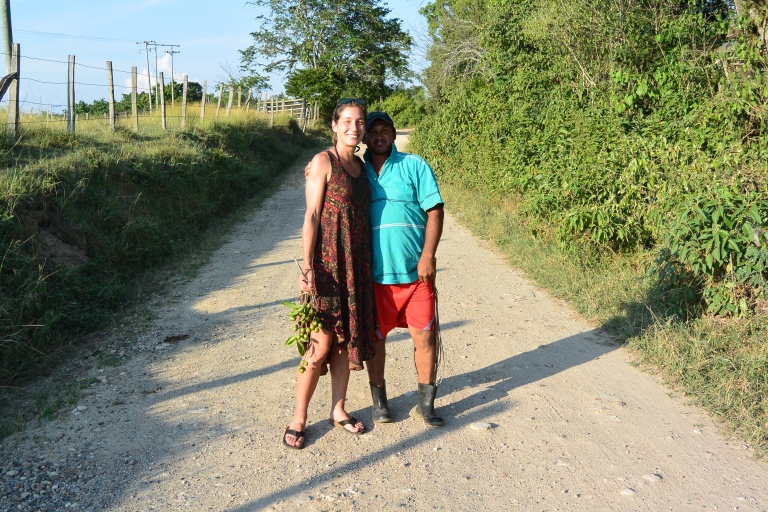 What we probably enjoyed the most is the simplicity of Colombians… They always want to help no matter what. 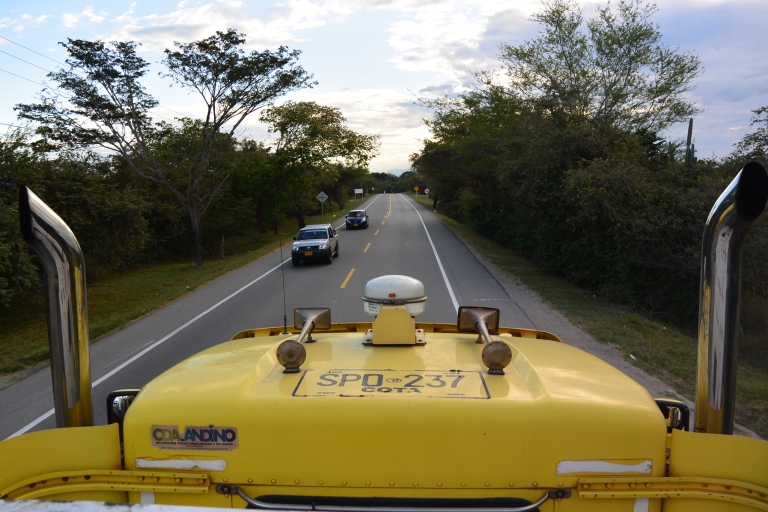 No rooms inside the truck ? Go on top ! 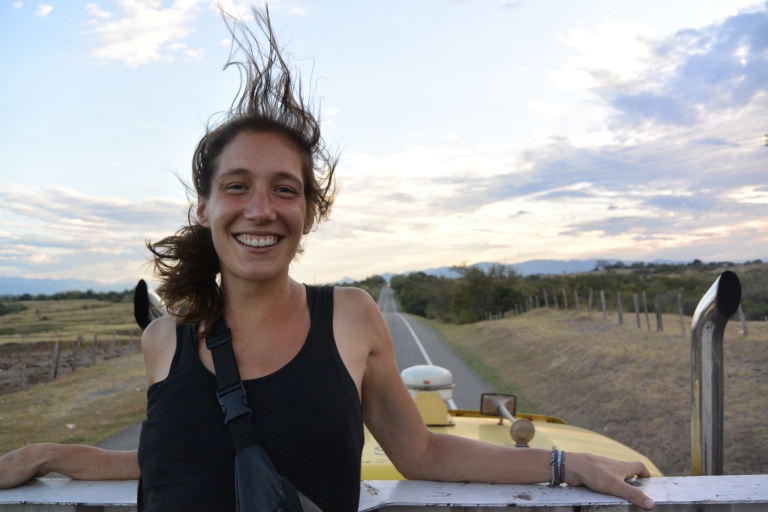 Thanks to that long ride, we made it to the desert. Once again, hospitality was at the door. 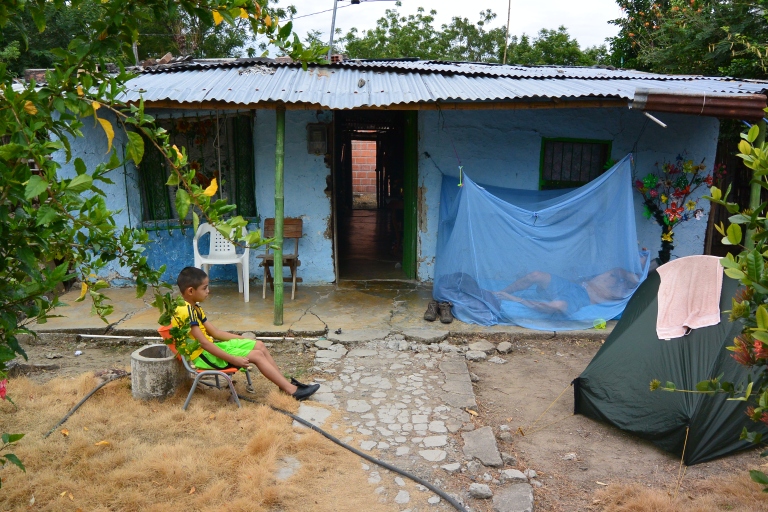 Since cold and harsh mountains were awaiting us after the desert, we decided to take our time to thoroughly enjoy the place. Thus, we crossed the whole thing by foot.

In order to survive the heat, we would only walk in mornings, evenings and at night.

It was tough but payoffs were huge. Stunning ! 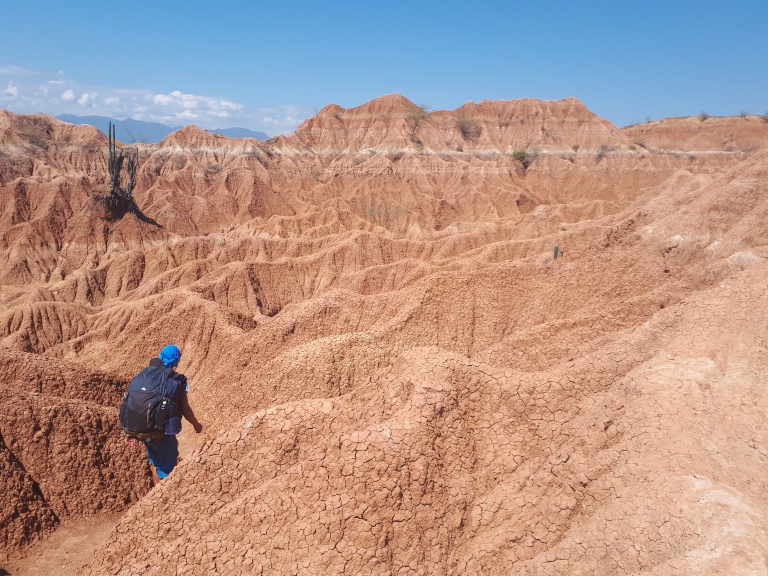 We spent 3 days in total in the desert. 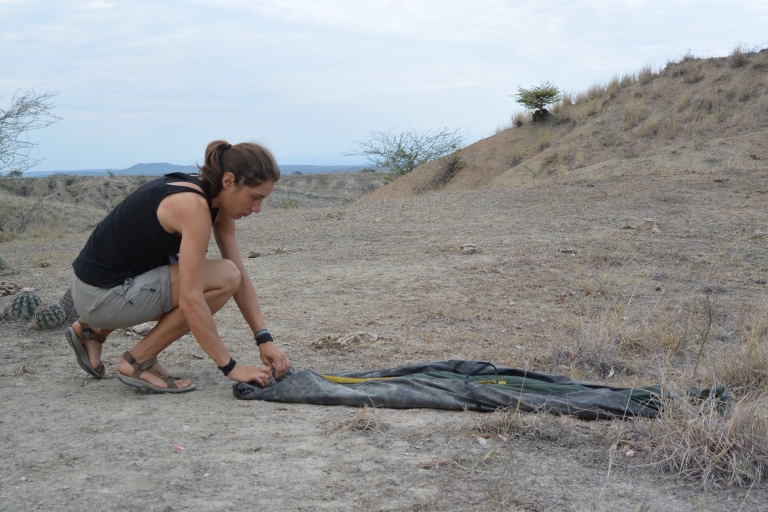 We finally left it, with that beautiful landscape behind us. 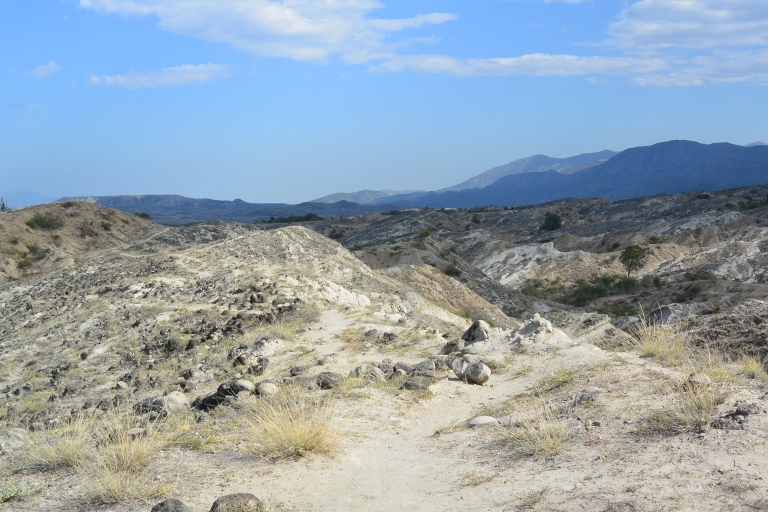 And a good 35 kilometers later, we made it to the first town…

On our way to the Andes, we passed through a small city called Baraya.
We went there because the whole place lays by a huge lake. As we went through so much heat in the last few days, we decided to stop there for some time.

The lake was too big to swim, but we saw many people fishing around.
Naturally, we asked one of the fisherman if we could rent his boat for a few days. Surprised and confused at first, he soon agreed to give it to us for 10 000 pesos a day (around 3€).

We followed him through his field, and soon reached that beautiful unsinkable boat. 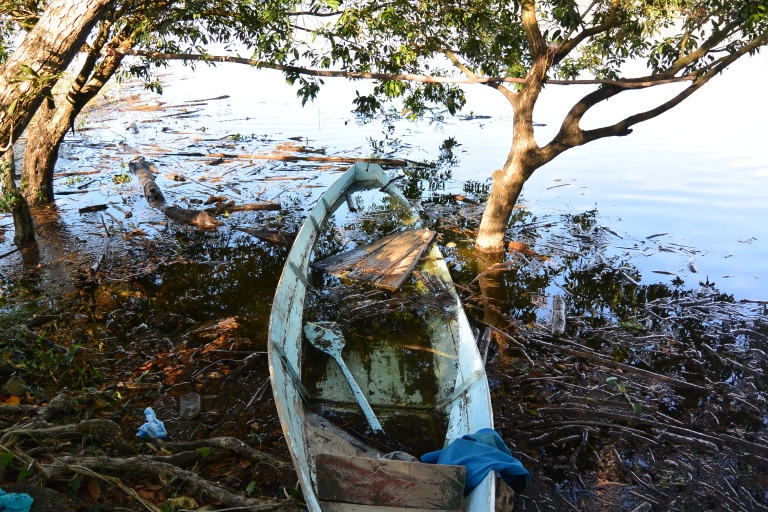 Good enough ! We just had to empty water from time to time !

We went for a 3 day adventure. Swimming during the day and settling on the shore at night. 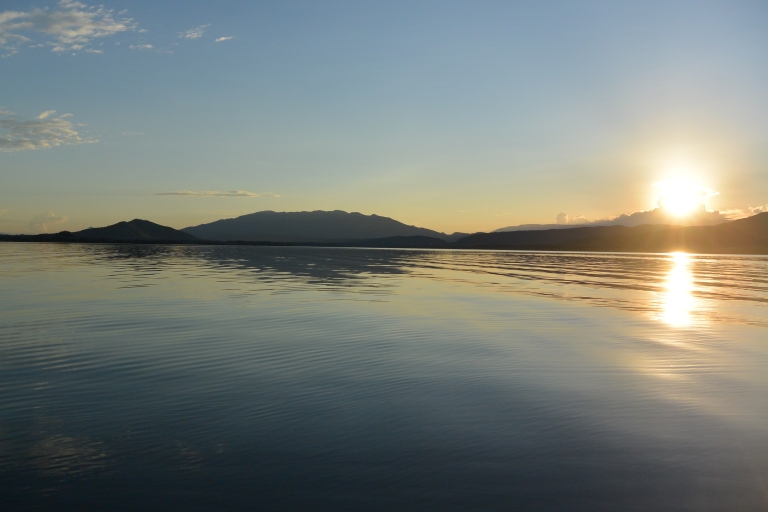 We landed in tiny pueblos to load food and water when needed. 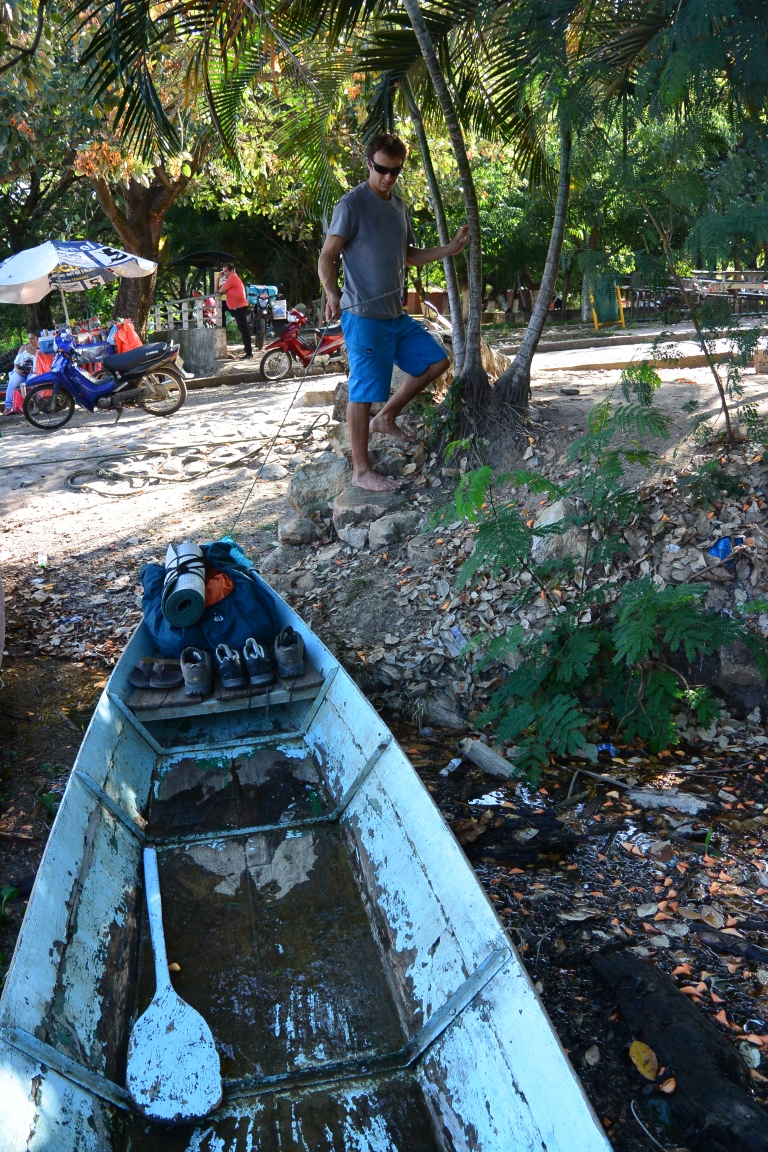 Locals laughed a lot at this, since they had never seen any tourist on those fisherman boats.

Last sunset on the lake… Time to go back to mountains now.

The southern part of Colombia is less developed and less touristic than the north. Perfect!

Walking our way through all those villages was something absolutely fantastic. We discovered colors I had never seen before.

We tried to cover 20 to 30 kilometers every day.

But most of the time, locals passed and gave us a ride…

In this area (called Cauca), we went through a lot of dirt roads (shown as main roads on google maps) and met a great amount of Colombians.

As we gained altitude, we entered a vast area full of coffee plantations… Iulia’s heaven. 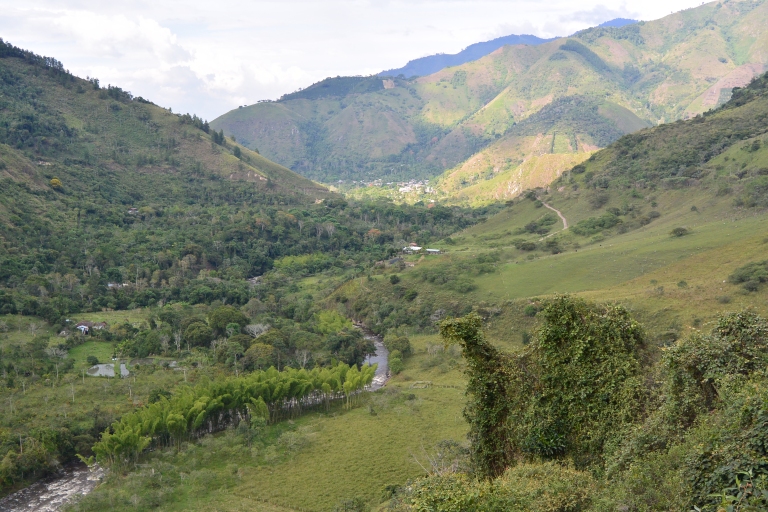 The smaller the road, the more peculiar are rides… In this part of my world trip, I had some of the most unique rides.

But this one beats them all… 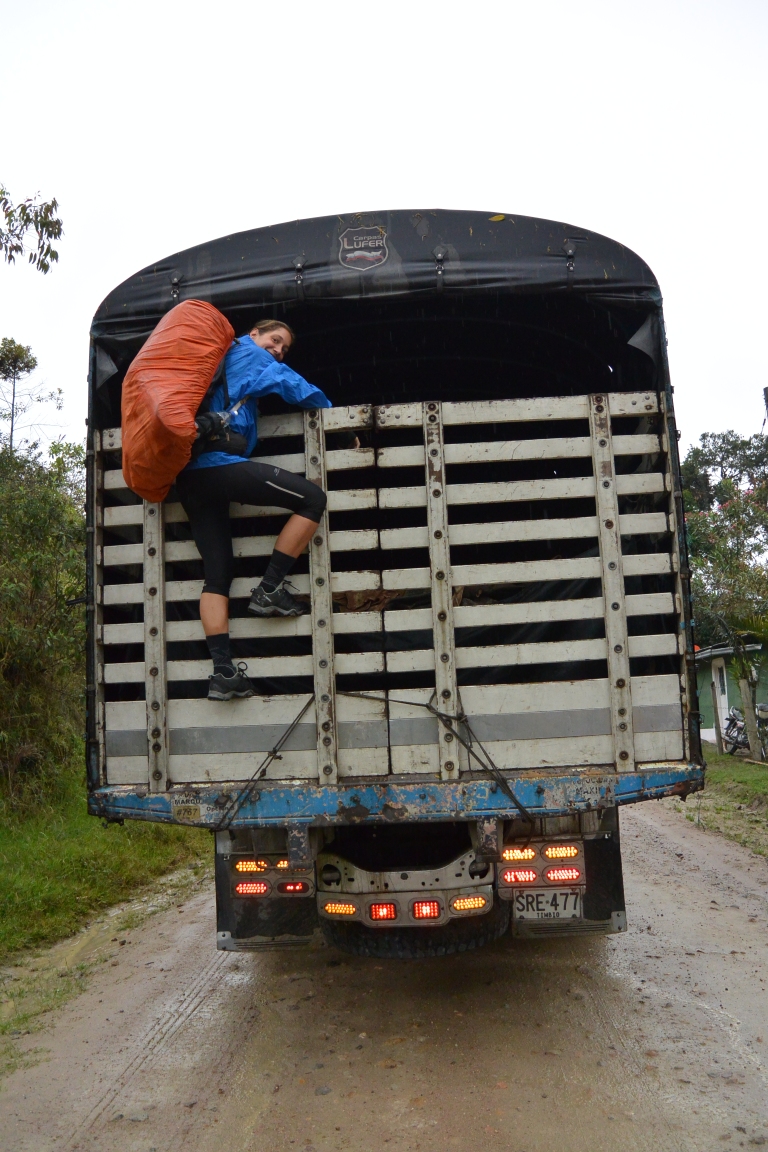 We had a truck that stopped and offered to take us to the next village. After jumping in, we realized he was carrying 500 freshly cut cow skins. Ough, that was a long 5 hours.

But in the end, it was worth it. We went through Purace national park, which was a beautiful cold natural wonder. The view went on for kilometers… 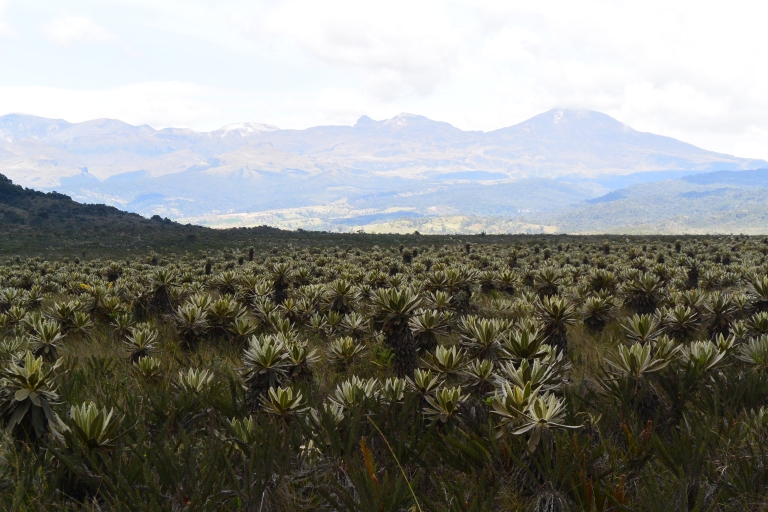 We hiked a little bit around the park then headed back south. 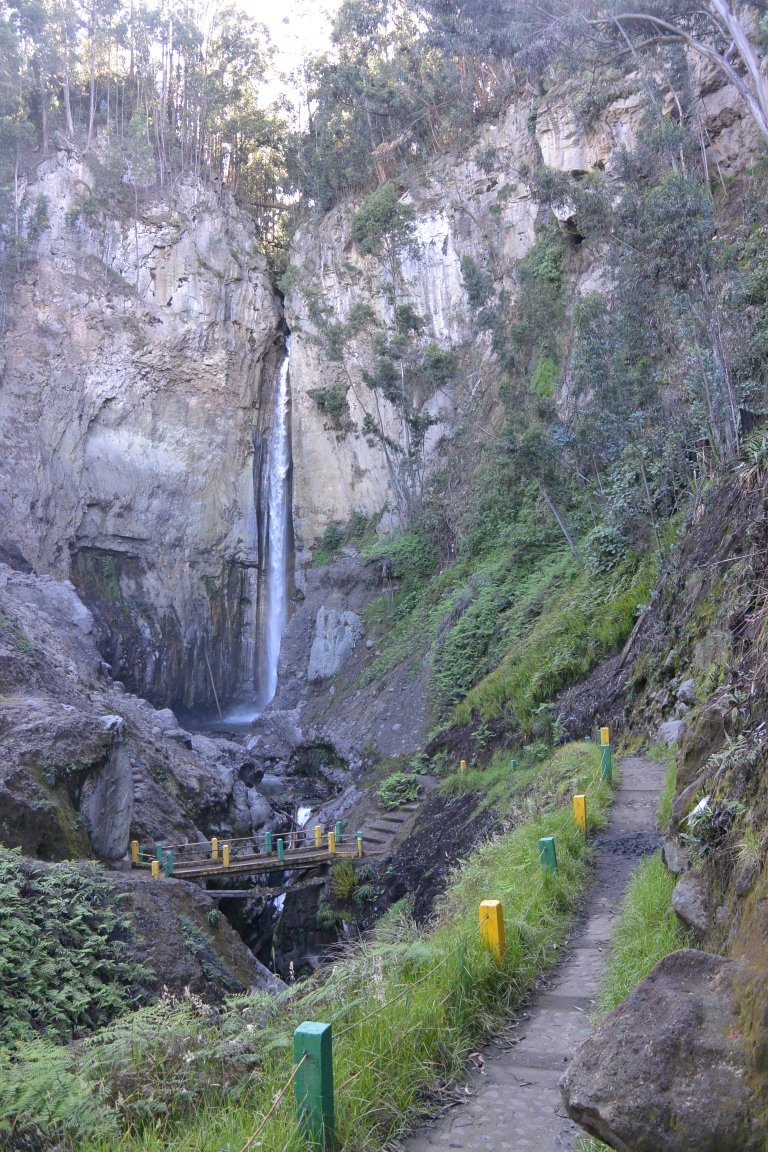 We met a couple of nice teachers (most comfortable car so far) who gave us a ride all the way to San Agustin, a city known for its archaeological statues. 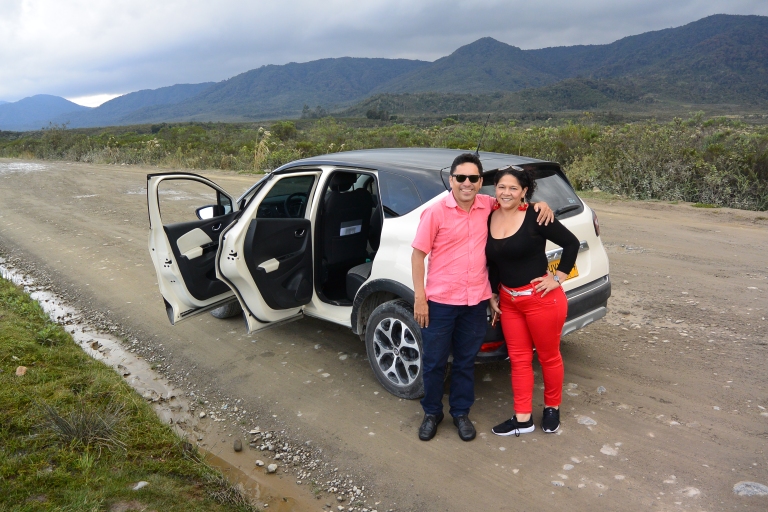 For the first time since we had started traveling, we took a hostel and relaxed a bit for a couple of days.

Perks of city life are always welcome… It’s always good to have a small wash.

Leaving San Agustin meant we were on our last chapter in Colombia. We were not far away from the Ecuadorian border.
Before leaving the country, we decided to stop in Mocoa, a city marking the beginning of the Amazonian jungle.

We started hiking in that warm and beautiful environment. 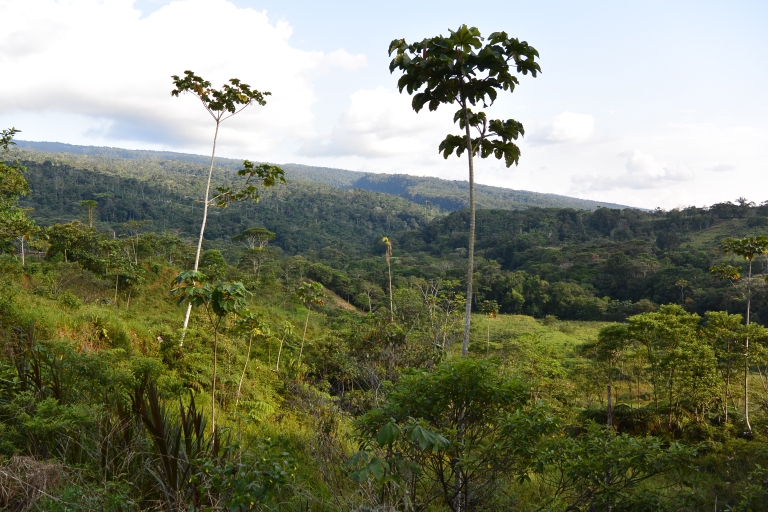 That’s how we met two locals who were living there, far deep into the jungle.

They invited us to sleep in the house of their community.

In exchange for our stay, we helped them with cleaning and cooking, while learning a lot about natural medicines of the Amazonian jungle.
People living there were mostly Colombians (some natives too) but also a few foreigners who wanted to learn more about their lifestyle. 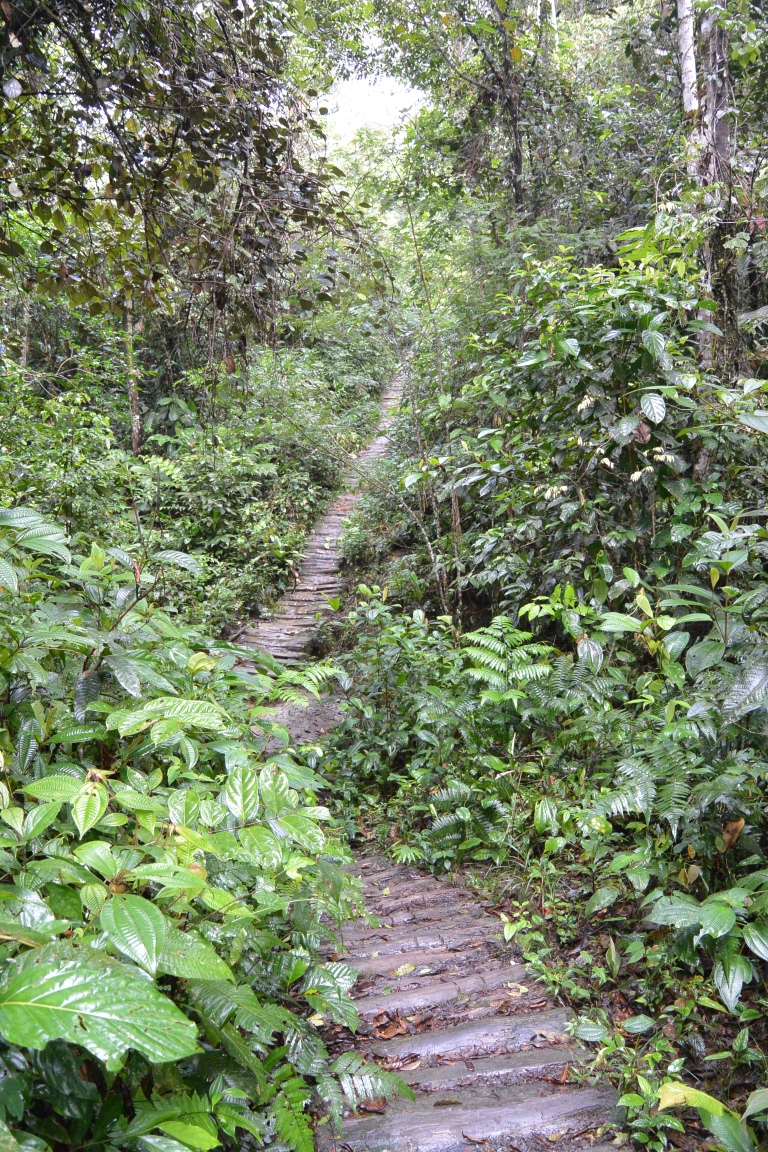 When we weren’t helping, we just hiked around the jungle and discover most beautiful landscapes.

Just like that powerful waterfall at the heart of the jungle… 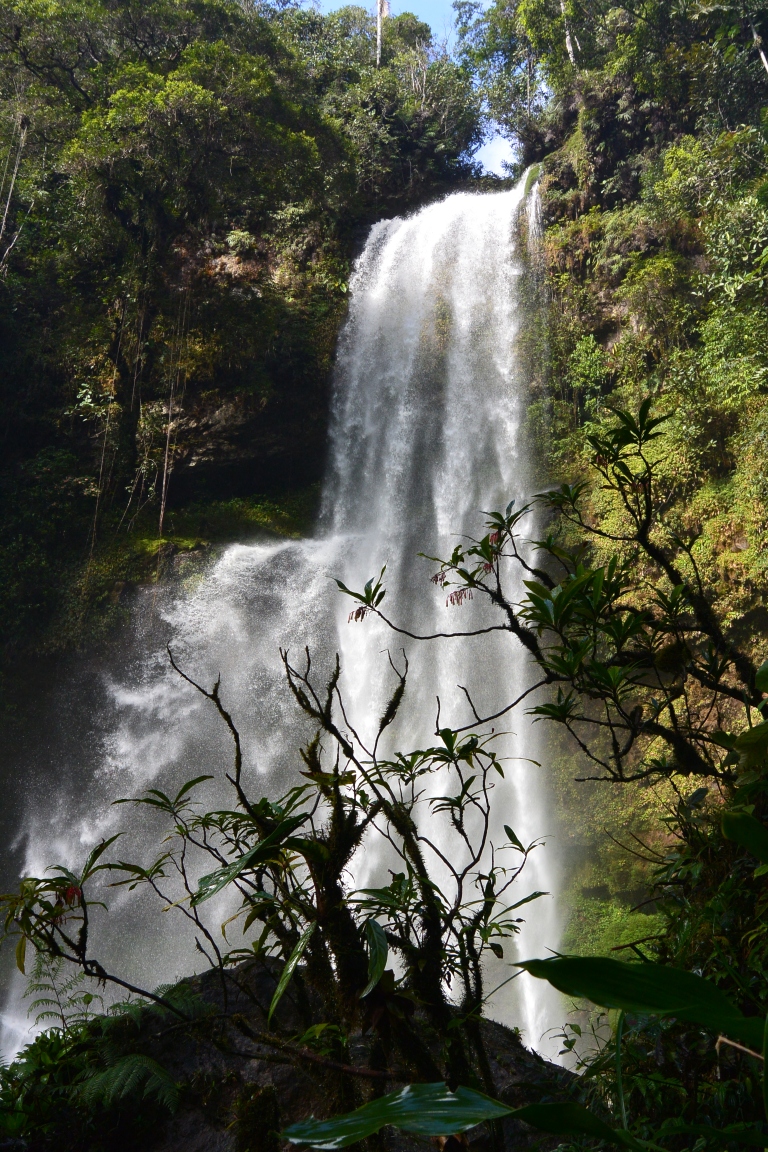 Overall, we spent 2 weeks in the community. It was not easy to leave but the travel went on… 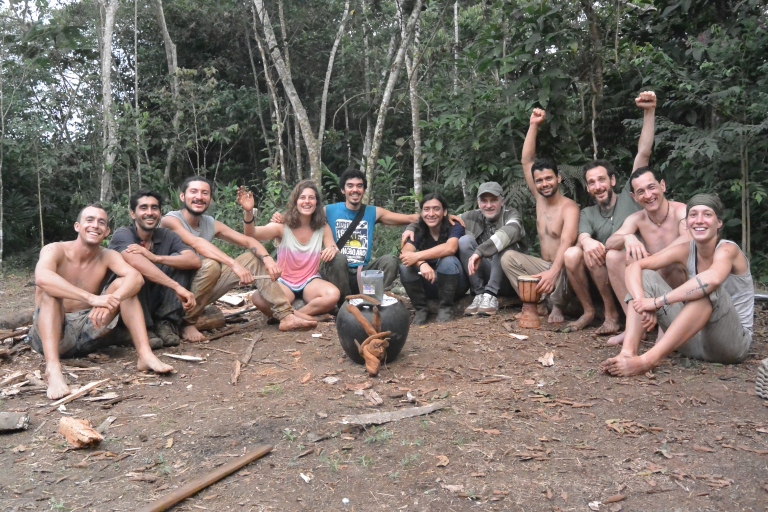 Our last road to the border was called the Trampoline of death, because it is a very narrow mountain road with a steep gorge on the side, full of waterfalls that fall directly upon the road .

We finally made it to the border.

We left a country that had definitely enchanted us. Simplicity of people, their lifestyle, their infinite kindness and the dramatic range of landscape… Colombia left us moved!