Just before leaving Gibraltar, I met a skipper online who will go from France to the Antilles in February.
She was actively looking for a crew and as we got along  well, we both agreed to go together. The only thing is, she will leave France soon and will be in Gibraltar in a month…
In other words, I have a free month before the departure… So how to use it ?

Well well… what about hitchhiking Morocco ?

Over the last few years, I had heard many things about Africa through TV, radio and random talks. Because of that, I was scared and had many stereotypes about North African countries. It became even worst in the last months with the conflict in Syria and I could really feel it from here.

Therefore, I was anxious to hitchhike in Morocco. However there is a huge gap between what we hear and what we see. By thus, I decided to discover this country with my own eyes.

I arrived in Tanger and was welcomed by my cousin Abdelmoumen who was living there for 3 years. Therefore, he knew how to cook amazing Moroccan food.

I stayed a couple days with him and discovered the Moroccan way of life day after day.
He was the perfect guide, hosted me and showed everything I needed to know to get along with the culture.

I was quite amazed to see that France is not the only place where we could eat snails. 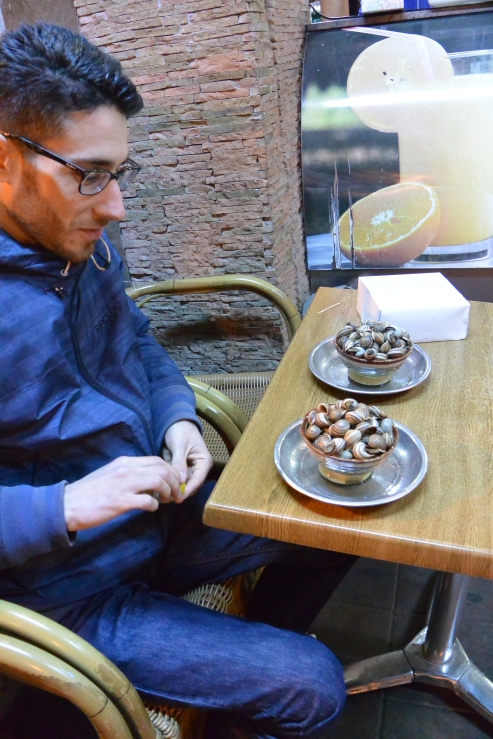 When Moumen worked, I walked and discovered the city by foot. 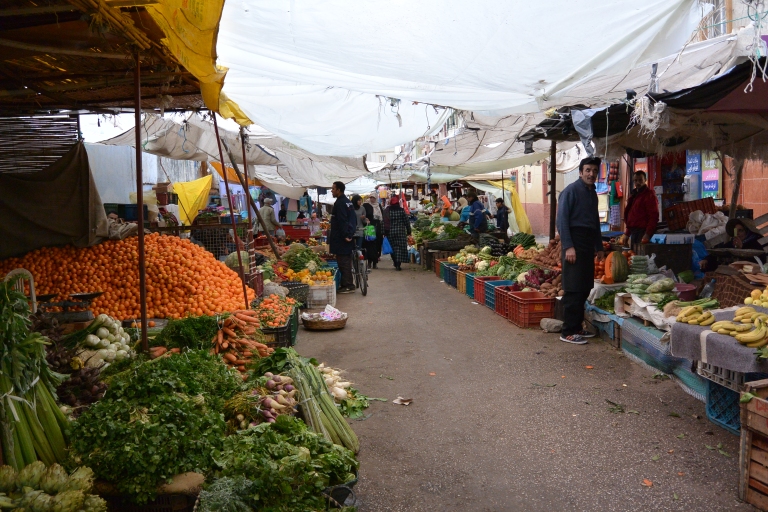 I also realized that life here is super cheap for French guy. As I love Moroccan pastries, I went crazy and bought a lot of them in the first bakery I found. 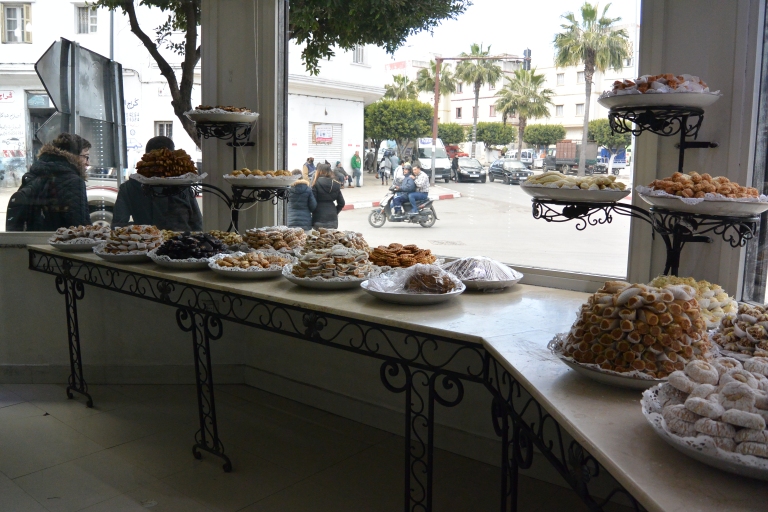 I spent the next day at home recovering my feast… Ok I’ll go easy on food from now on.
Anyway, thanks so much Moumen for this great introduction of the world-renowned “Moroccan hospitality “.

Well, after three days in Tanger, the “will to go” came back and I decided to start hitchhiking. My plan was to follow the coastline until Agadir and then go to the desert.

But here, once you rise your thumb, you have no idea of what is going to happen. You just wait and see.
The first person I met did not speak a word of French and was smoking haschish while driving. Not a bad start. 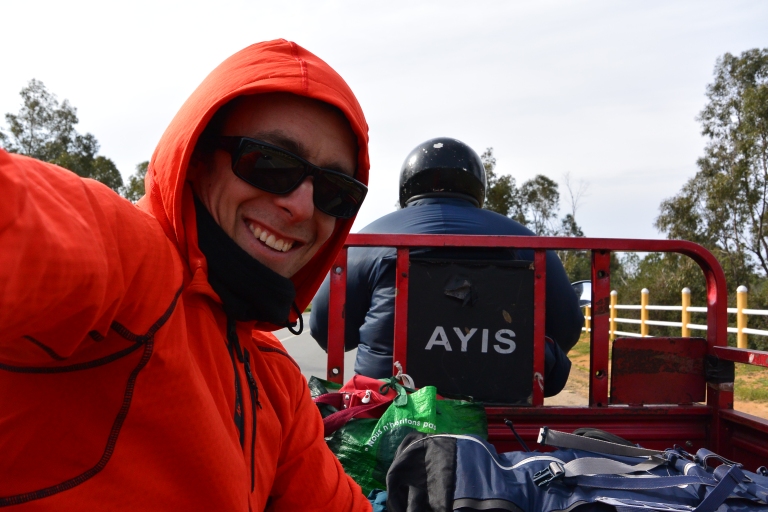 That day, I made it to Assilah, a beautiful city by the beach that has advised me Olvidiu, my friend from Romania. 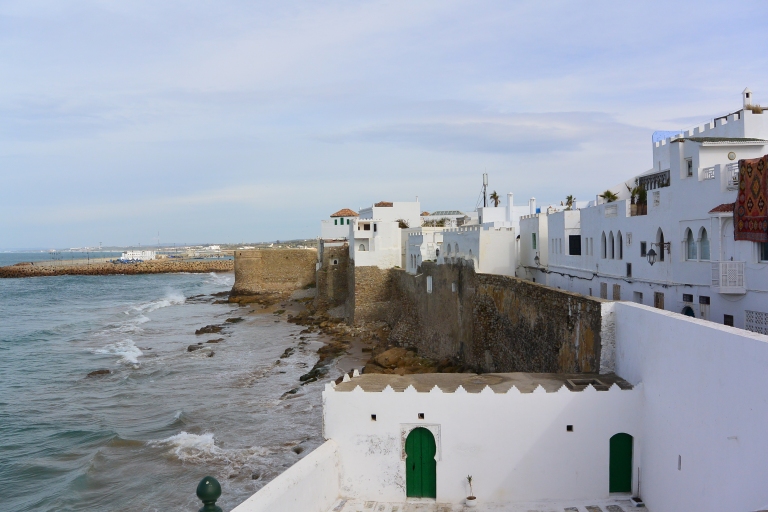 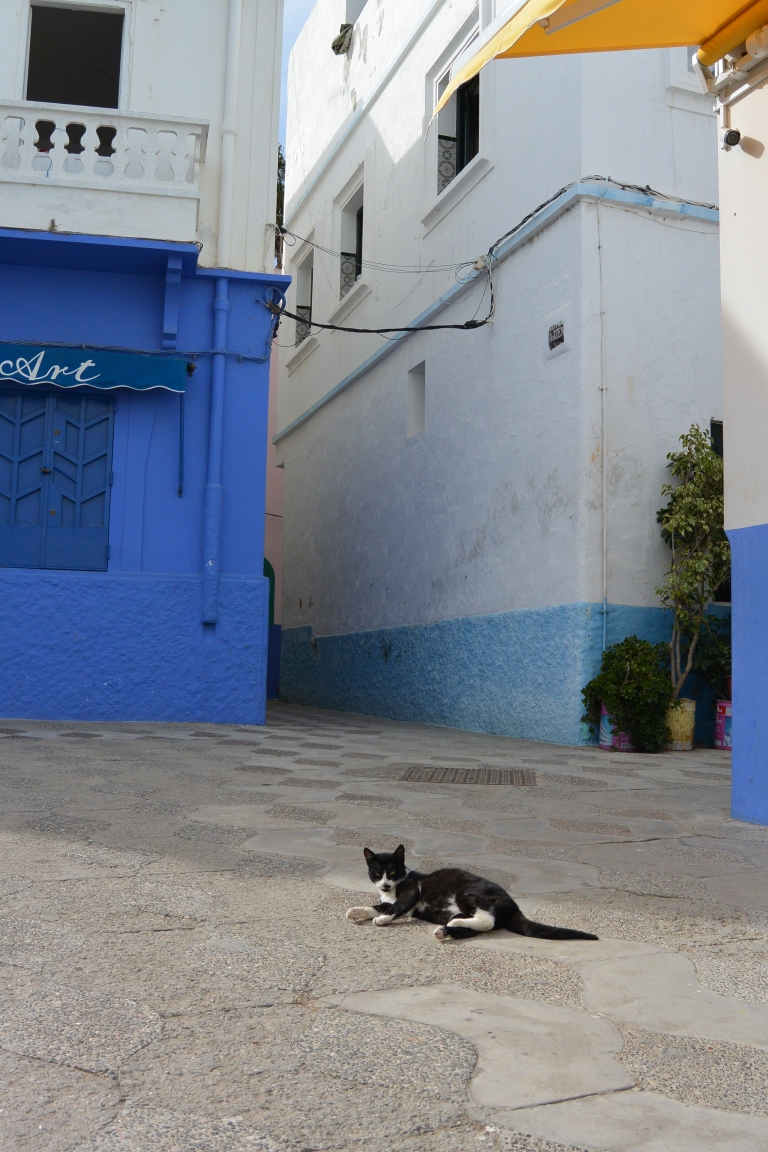 I rose my thumb again and met two Moroccan guys on their way to Rabat. They were on their first days of holiday and were super excited about it.
The route was long because they were stopping to pray every time they heard the Imam singing.
Anyway we got along well and shared some traditional meat together.

We decided to go party in Rabat but just before arriving, one of the driver received a call from his wife and he learnt she has just given birth (was earlier that what he thought)…
Obviously, his wife was freaking out so he had to drive back to Tanger as fast as possible… Well that’s short lived holidays.

As I came from Tanger, they decided to leave me to a cousin’s house on the way to Rabat.
I had no idea where I was and slept in the same room with 2 others Moroccan that barely speak French. They were nice and invited me to go through a typical day with them tomorrow.

I woke up in the morning and and realized we were in a hair salon. To thank my host, I decided to get a haircut. 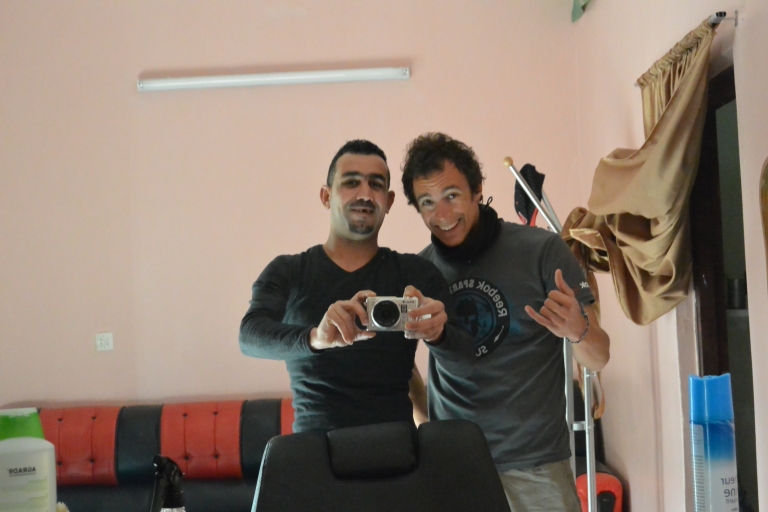 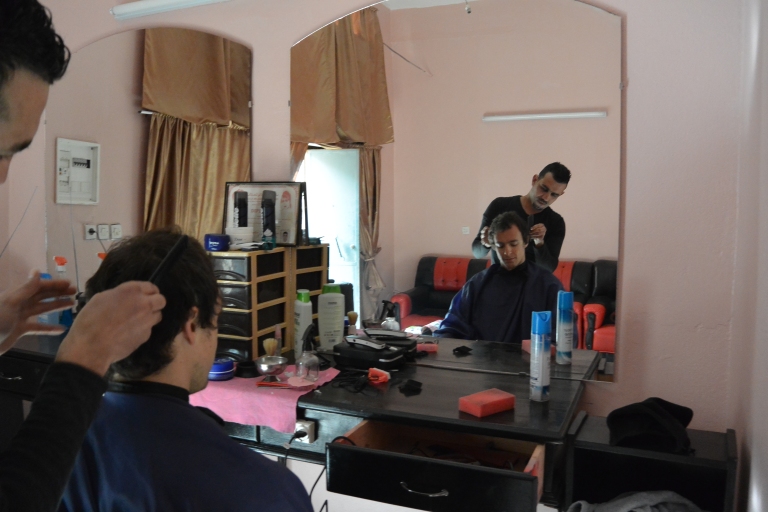 As it was a very modest area of the city, most people did not have showers . Therefore we went to the traditional Hammam…
We entered a large room with a lot of steam where many men were showering.  Once again it was only locals.
It was super warm and my host put a lot of water on me and started to clean me exactly like this.

That was  a bit hurting but I had to say that my skin was super soft at the end. Needless to say I was a bit surprised.
As it was Friday, the holy day, we went to eat the traditional couscous made by her mother (it’s delicious). Many kids and friends joined to celebrate with us. 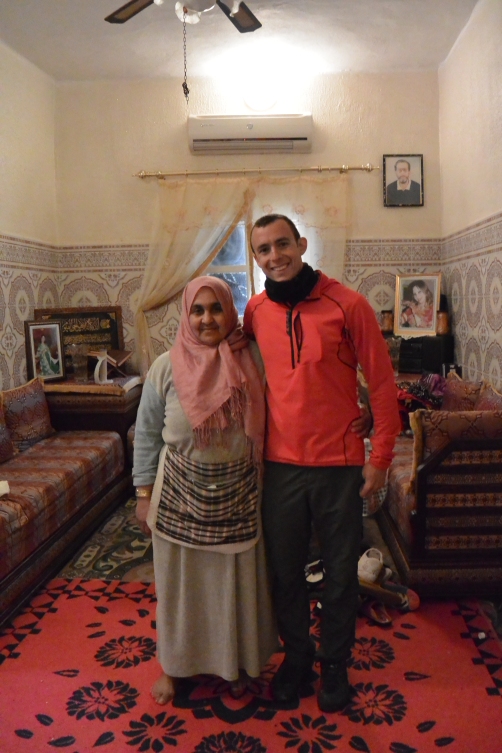 At night I learnt how to make a traditional tajine that we shared with some other friends. 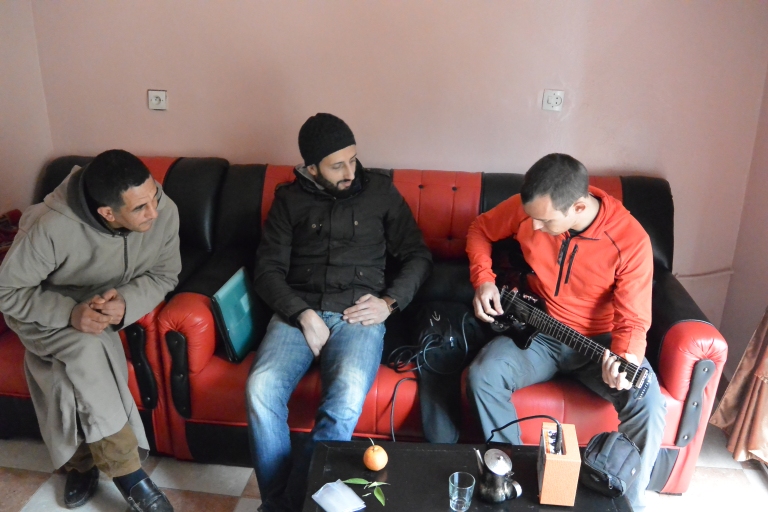 I left in the morning and finally learnt the name of the city. I was in Sidi Slimane.

As I was walking, I start to laugh remembering the last day and wondered how my next day would be. I rose my thumb and waited a bit. I had a free ride from a taxi.

and from a bus…

I arrived in Kenitra and stopped to eat a bit. I met Imane, a girl living there. She offered me to share her meal and to have a conversation together.

Then she decided to show me a bit of the city and the main beach. 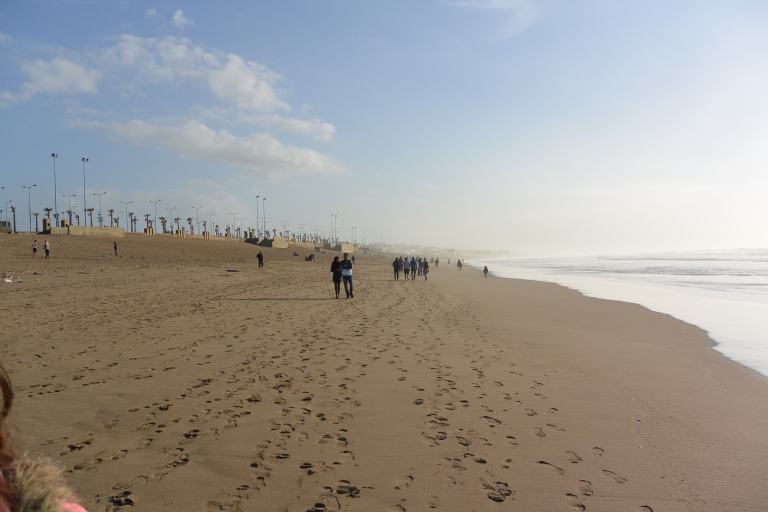 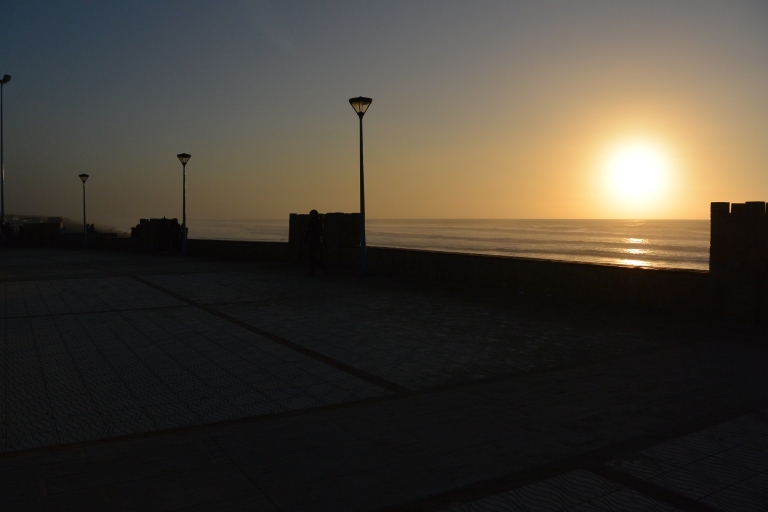 Well, I’ll focus on next days to find a spot to surf.
Imane was super nice and answered all of my questions about Morocco. She explained to me a lot of things about the Muslim religion and the Moroccan history that I did not know. At night, she had a party with friends in a cabin close to Rabat.
That place was outstanding. 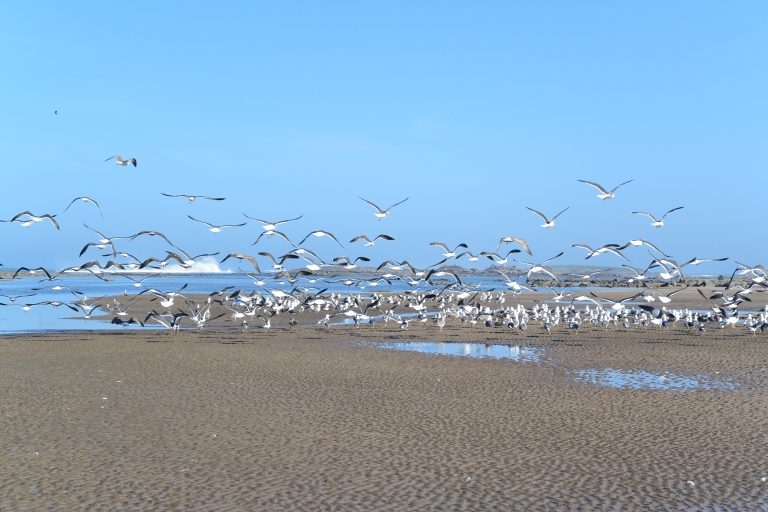 Her friends were very welcoming and helped me to find a ride to Casablanca. They simply asked a gendarme to help me out. He stopped a driver and asked him to take me with him… That was simply amazing. I still can’t believe how friendly people are.

Once again, I learnt a lot from my driver about his country, his religion… He stopped to pray one time and invited me to have tea with his family. They offered me a place to stay at night and a proposal to marry his little daughter if I convert to Islam (said with humor of course). 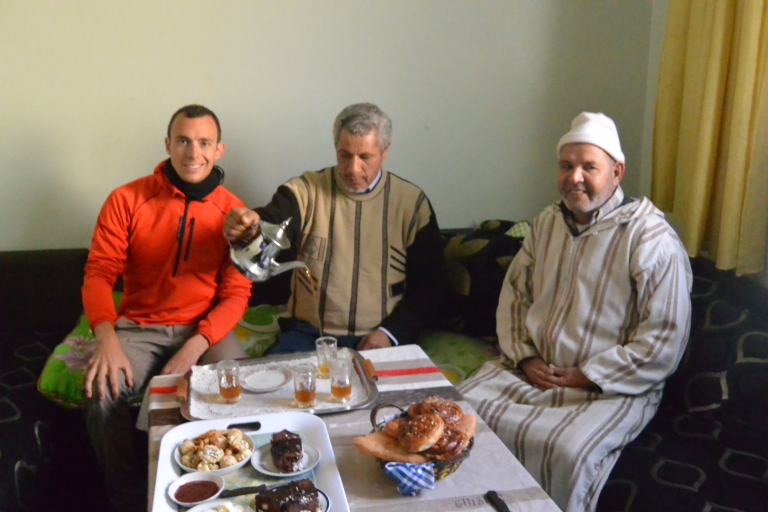 I finally reached Casablanca and met Myriam and Rina El Karzazi, the family of a great friend in France, Omar. 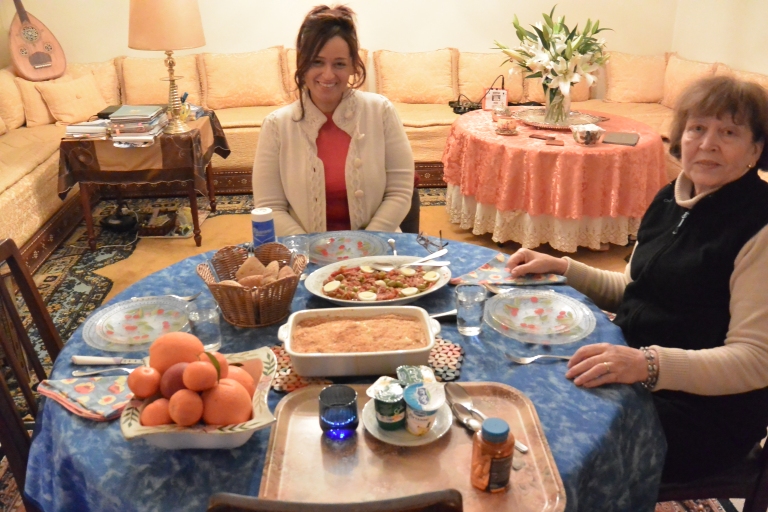 I stayed 3 days in their house and enjoyed a large number of amazing plates. 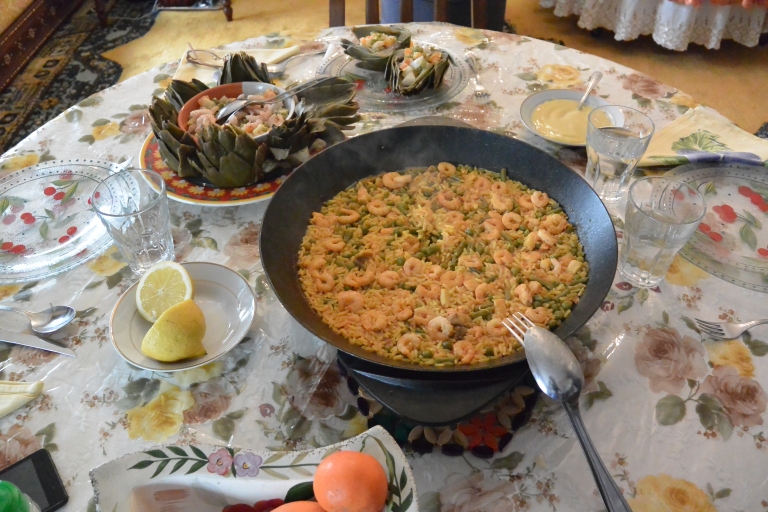 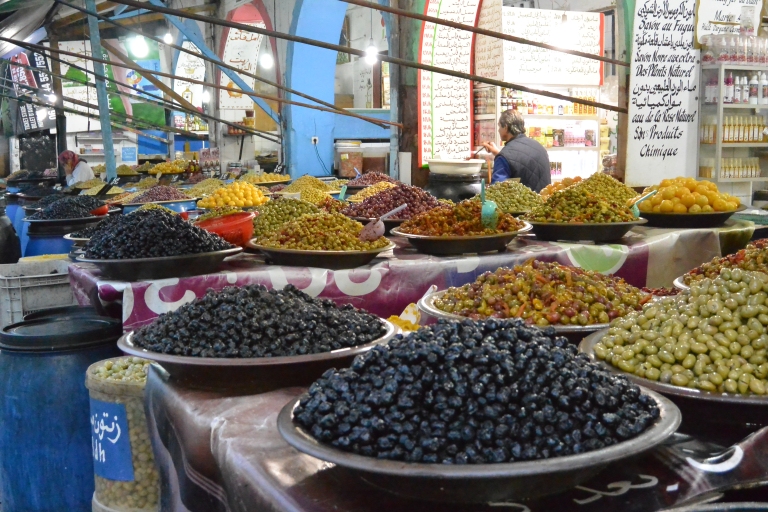 I also walked a lot and discovered the economic city of Casablanca and saw some of the most famous areas like the Mosque and the main beach. 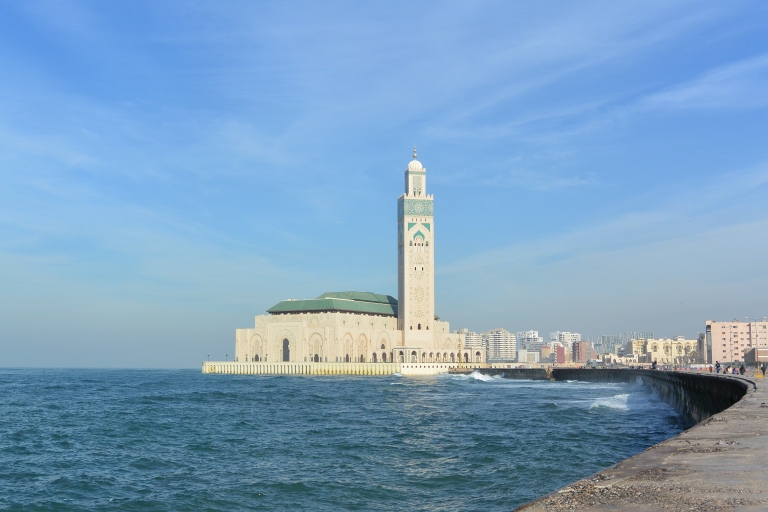 Back home, there were always something nice to enjoy with my host. Either we could have endless conversation or play music together. 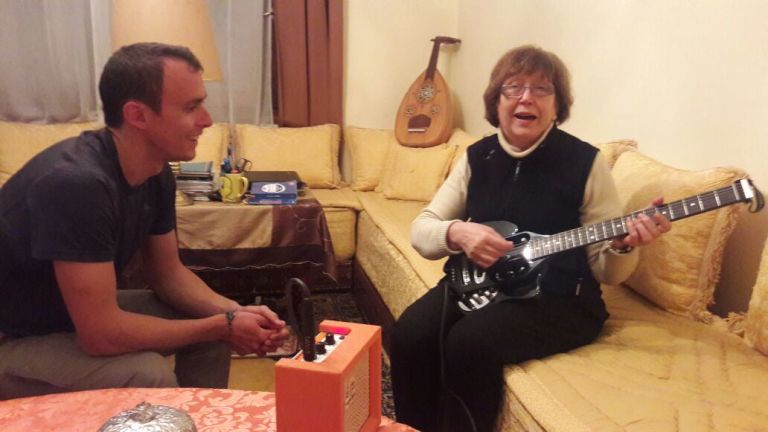 Those 3 days in your house were simply amazing. Choukran !

Now I’m leaving highways and cities to just go in the wilderness… but before I’ll just go to Guillaume Hortal house, another friend who’s living in Casablanca (from Château-Thierry ! We are everywhere ).