I don’t know how many times I said that sentence that day. But in the end, I eventually made it to Sevilla, thanks to all these super nice drivers. 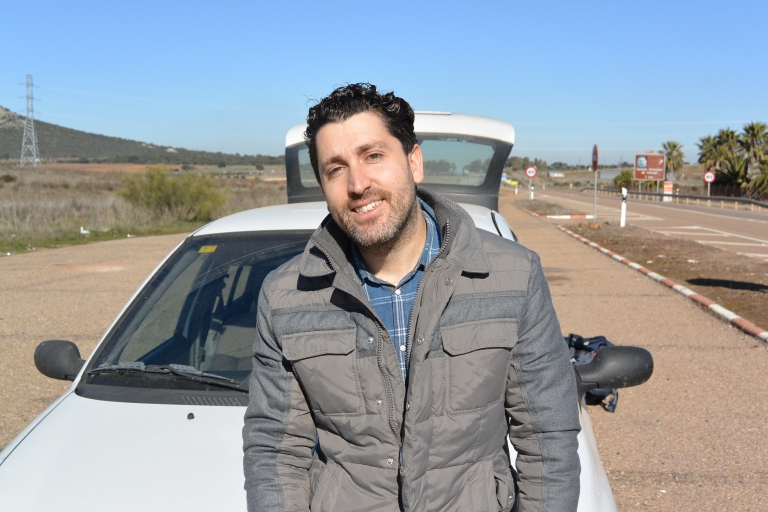 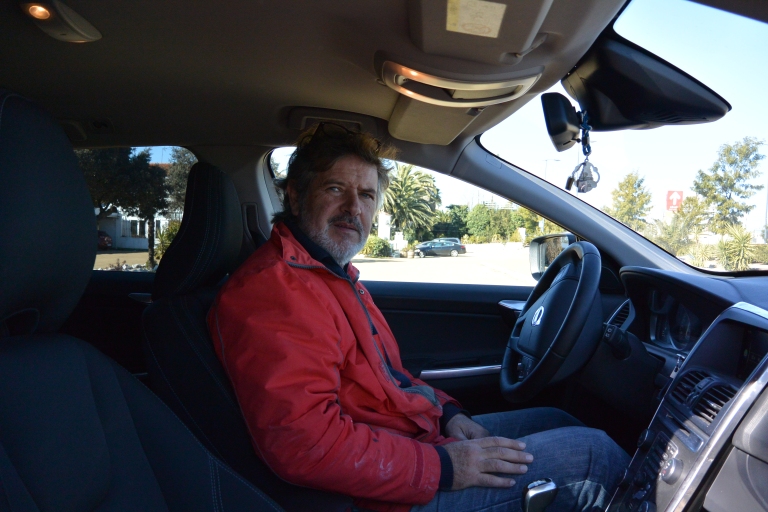 I arrived at the end of the day and went to my classic routine, tapas and internet. I was looking for host but could not find any.
I could have been bored but after last night experience, I decided that I would not care. Indeed, I was in Sevilla and I should enjoy this amazing city.

Therefore I decided to speak with the waitress to get information about best places to go. We got along pretty well and after 5 minutes, she offered her couch in her our house for the next days…
Good, I think I have learnt something, I gotta chill.
Her name was Chiara from Italia.

Therefore, we went to discover Sevilla by night. 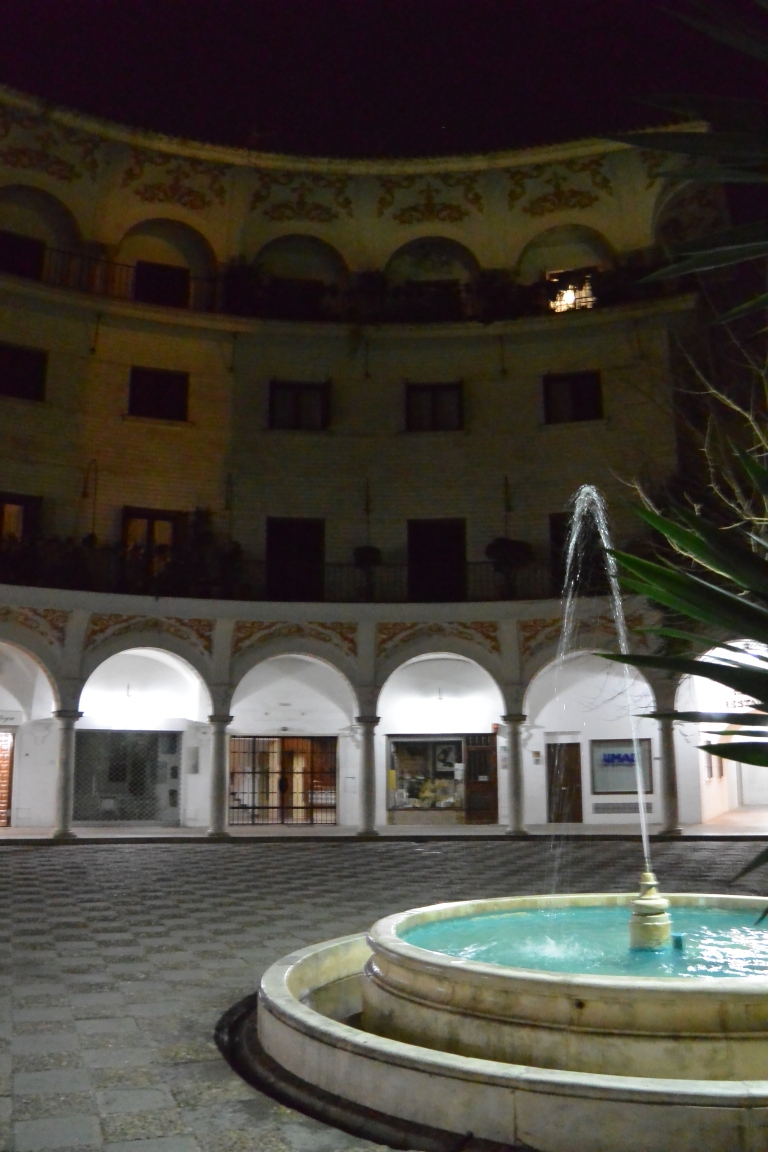 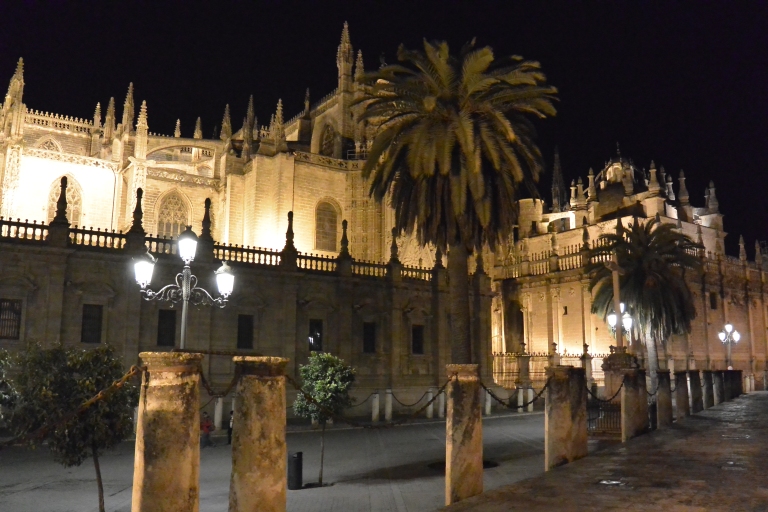 I liked it straight away.
The city was full of small streets and lights shapes were amazing. 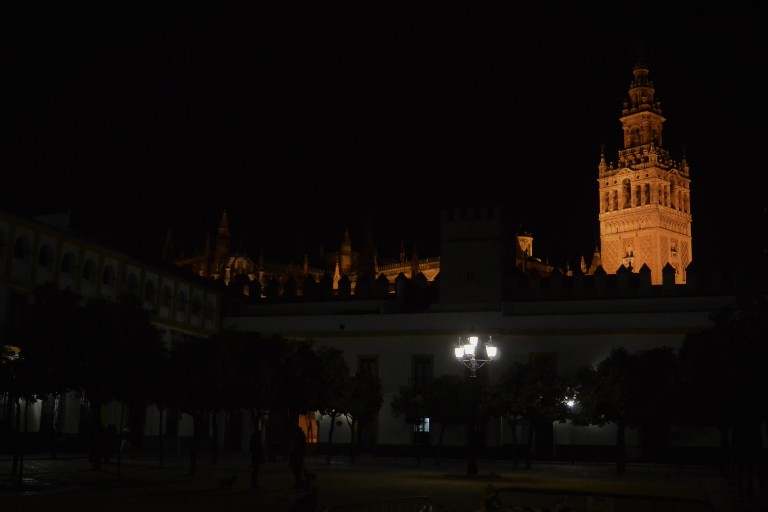 I extended my stay and decided to enjoy the view by day.

I went to the Cathedral and learnt a bit from Sevilla’s history. 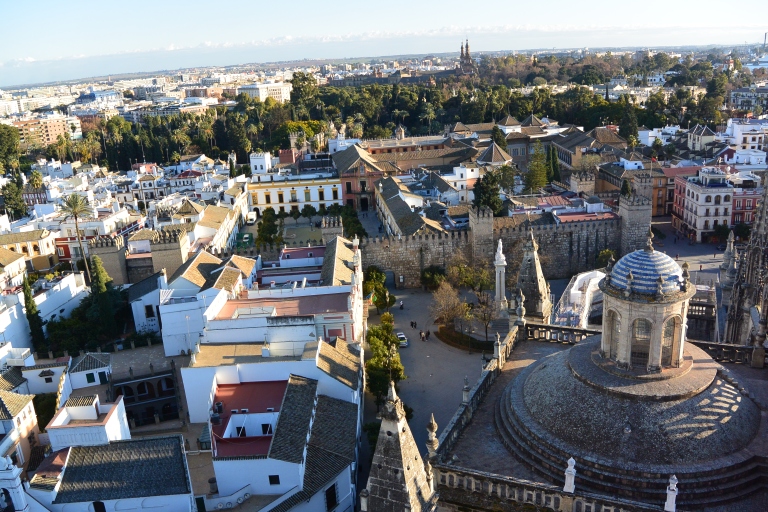 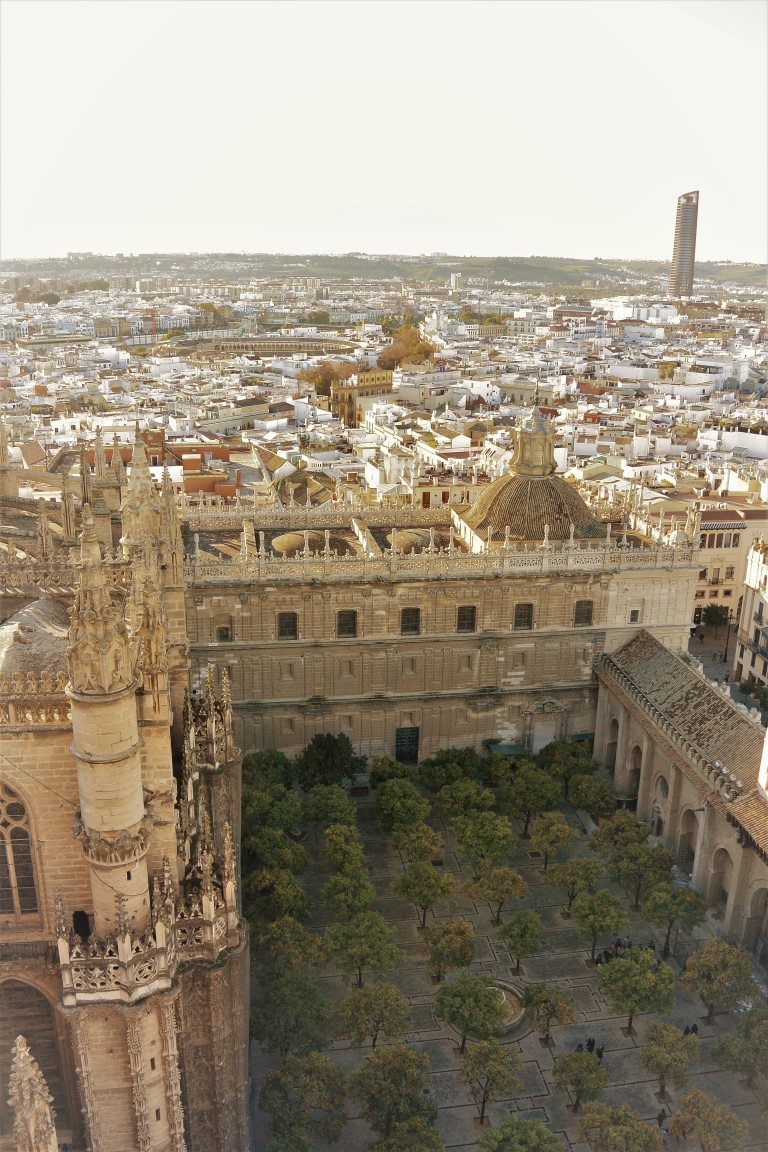 Sevilla is in the south but I was still freezing there. So I decided to go even more south and followed the advice of Santiago Daz (a lawyer who I met in Burgos) and went to Cadix. 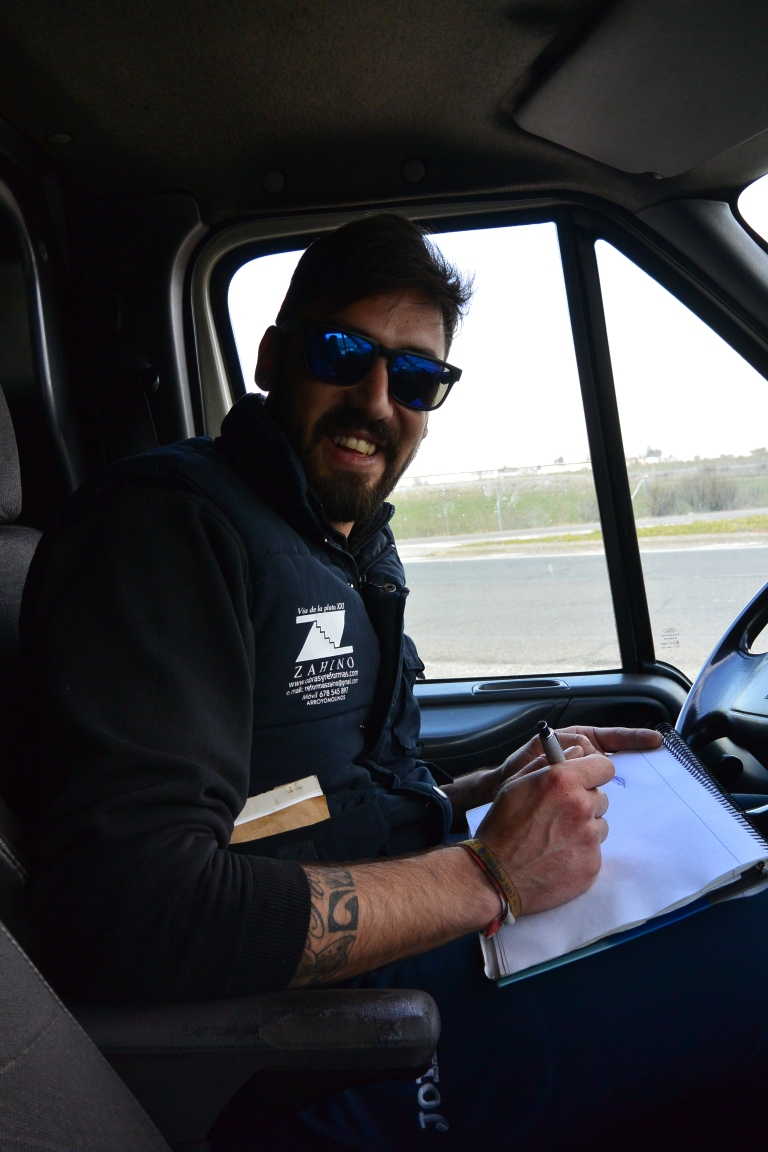 Leaving Sevilla by foot was something and it took me 8 hours to do 100 km…
But in the end, I got an amazing sunset.

I was already thinking of settling my tente when I met Nincho, a professional skateboarder who showed up from nowhere and drove me straight to Cadix… Hahaha what a blast !

In Cadix, I had to meet Pepe, a musician who proposed to host me for 2 days !

Pepe arrived not that long ago in Cadix. We decided to explore the city together. But before, breakfast on the roof. 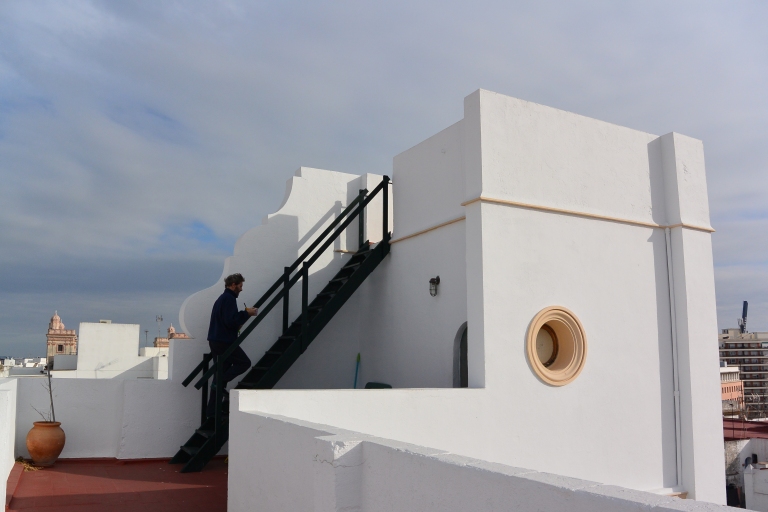 Cadix is indeed beautiful and located close to many surf spots… 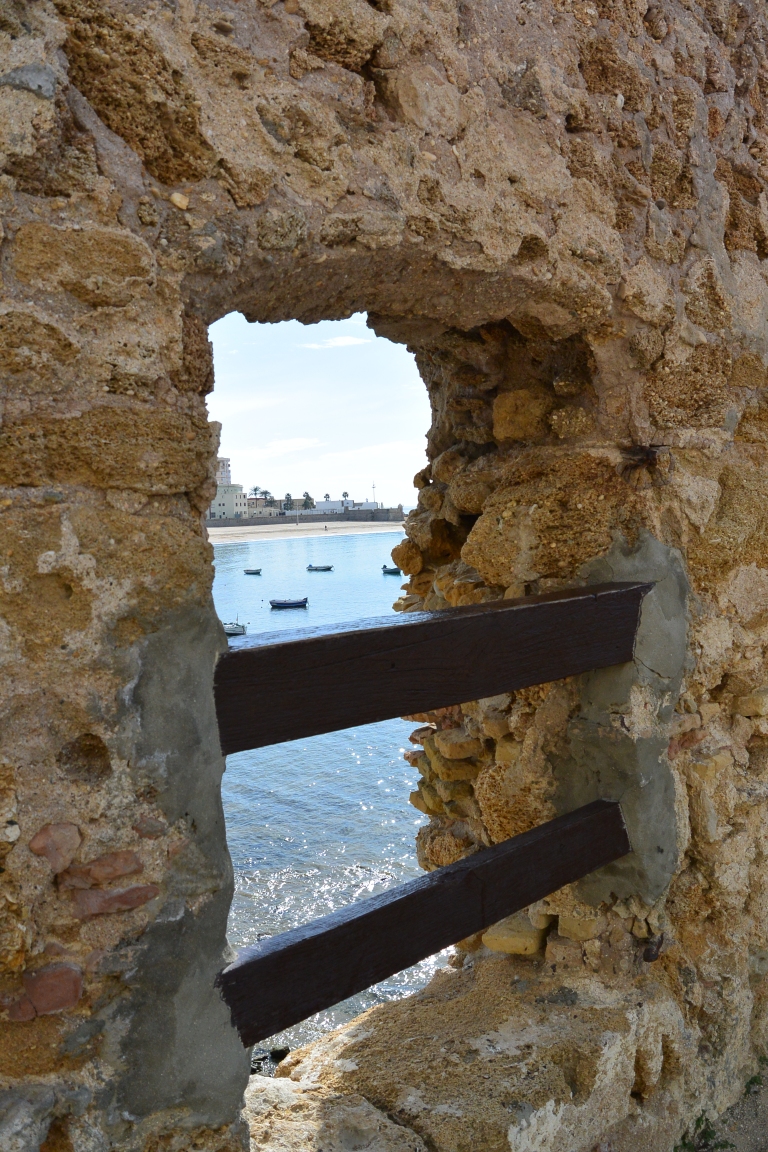 Time is flying, it’s been almost 3 weeks since I left my house.

But let me speak a bit more about my host, Pepe ! He had been learning French in Senegal and… had not lost the accent…

He wanted to make sure that I would keep great memories from Spain. Then he taught me how to make tortillas. 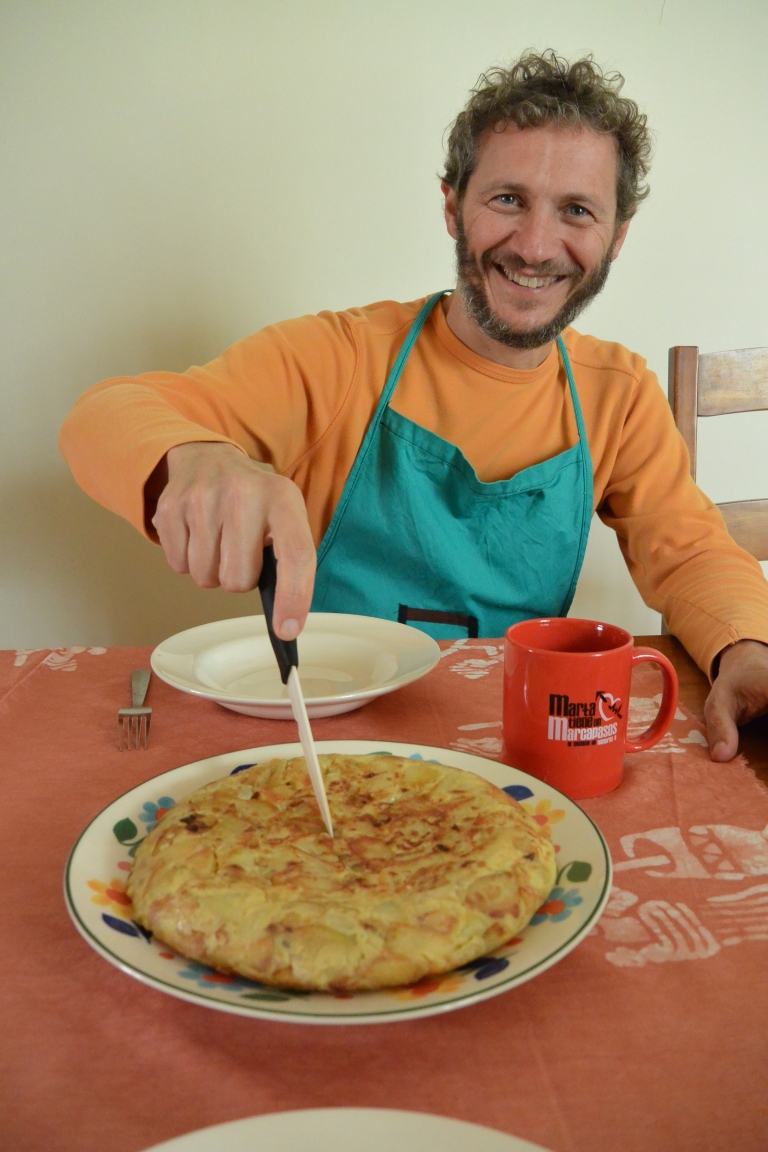 He took me to a Flamenco pena. Indeed, the flamenco was born in Andalusia ; Cadix is considered by many as the original seed.
I was incredibly lucky as we went to a local pena where I was the only French and probably the only one not from Cadix… The flamenco there was real. 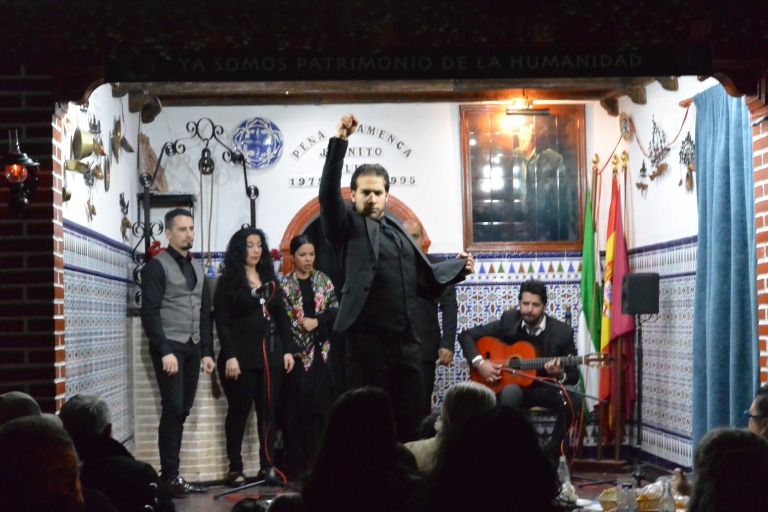 We left the next morning and Pepe drove me to Tarifa, the southern point of Europe. 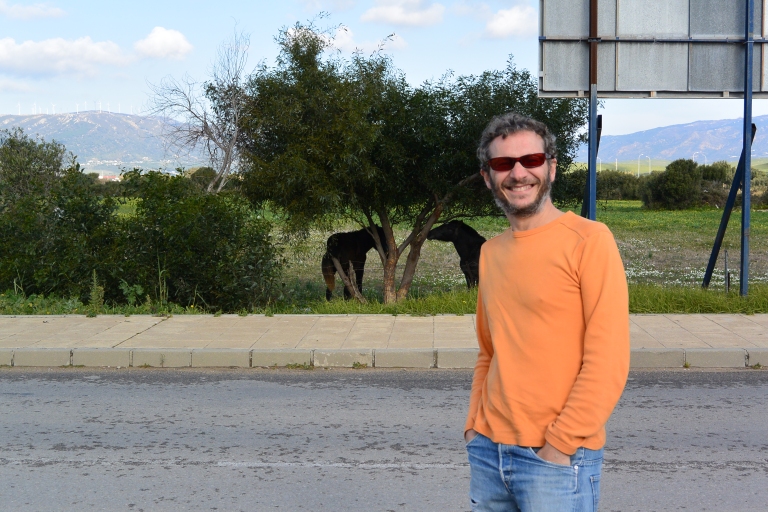 I walked a bit on the beach and suddenly, I saw the coast of Africa emerging at the horizon…

My first objective was achieved… 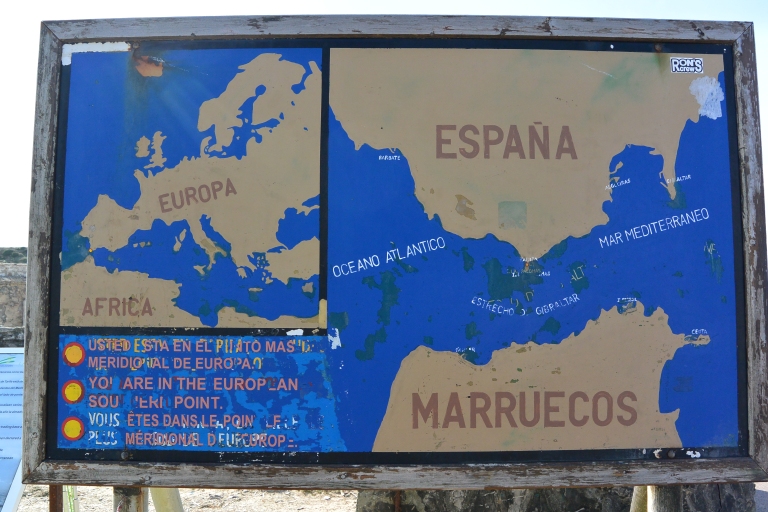 And for the first time of my trip, I could finally be sleeveless… aaaah! 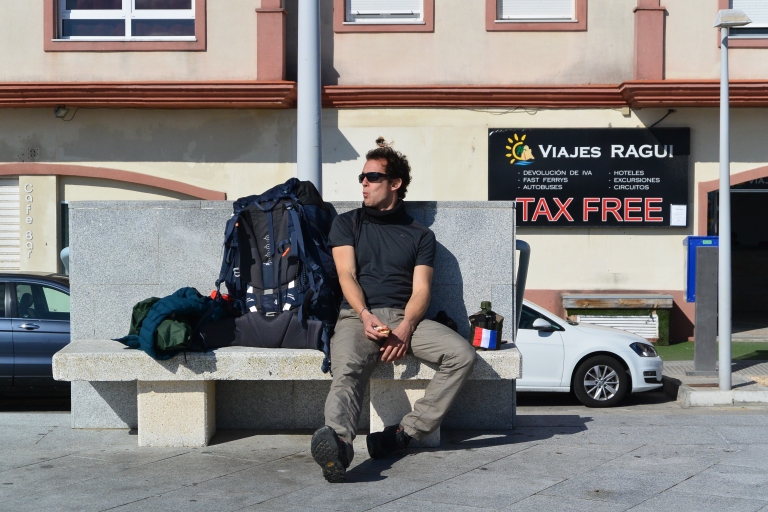 I had no plans for the day except that I had to be in Gibraltar at midnight to meet an host from Romania ! I got the whole sunny day to enjoy. 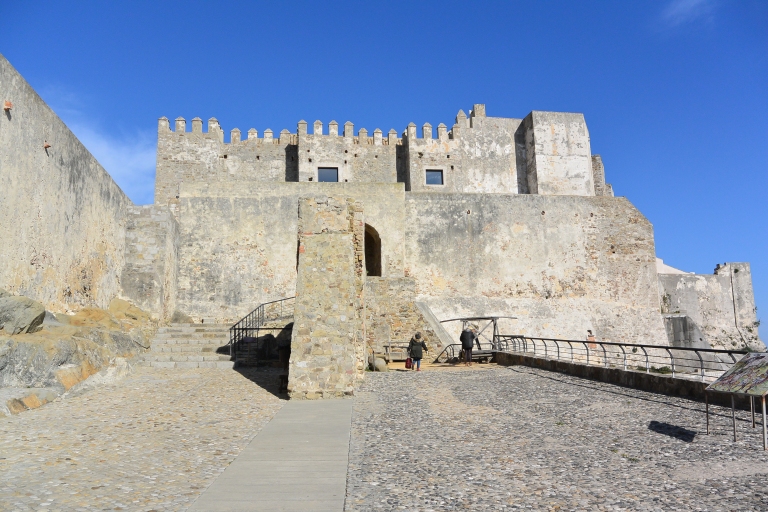 Tarifa is only 14,3 km (with a depth of 900m) from Africa… It’s amazing to think that all ships converge here to enter the Mediterranean see. Standing here was something.

In the mid afternoon, I hitchhiked to Gibraltar.

Although located within the Iberic peninsula, Gibraltar is a British city. To get there, you need to cross the airport and the border.
This is the TOP 5 most dangerous airport in the world. Indeed, the city is tiny and you cross the landing strip by foot…

The crossing of Gibraltar was something incredible… I got the feeling that I went straight to England. 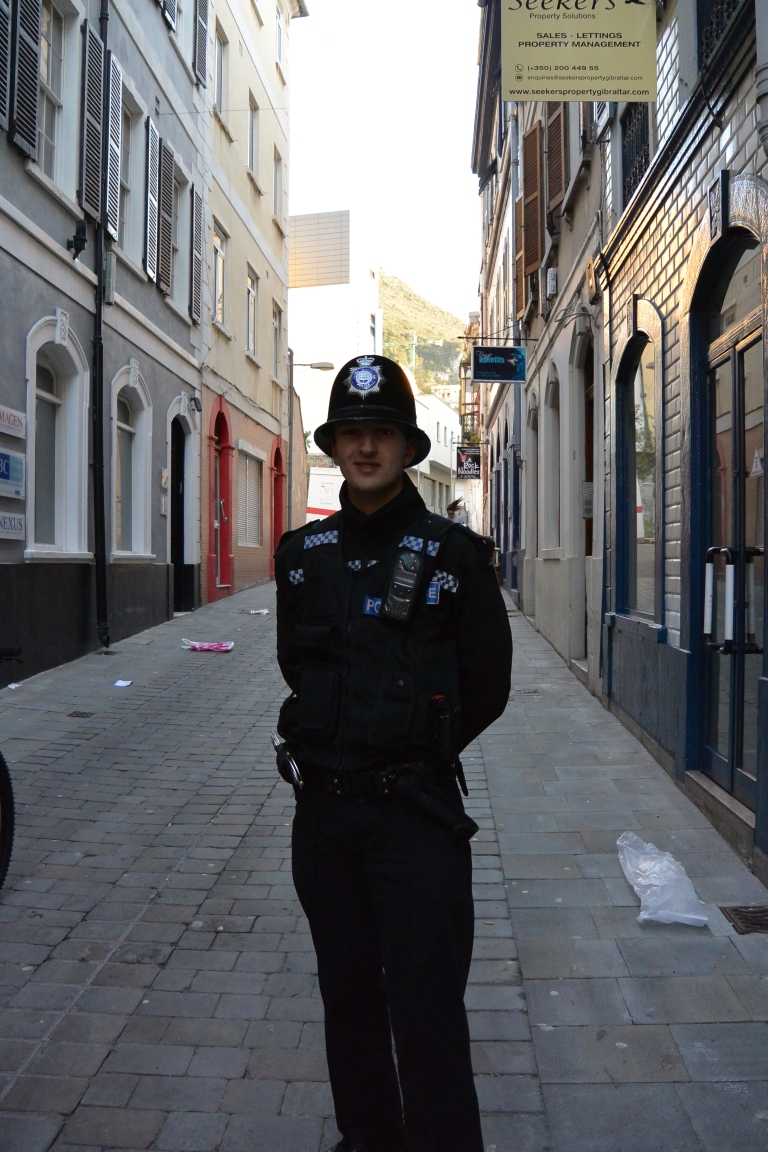 As I was climbing, I witnessed one of the most amazing sunset ever. 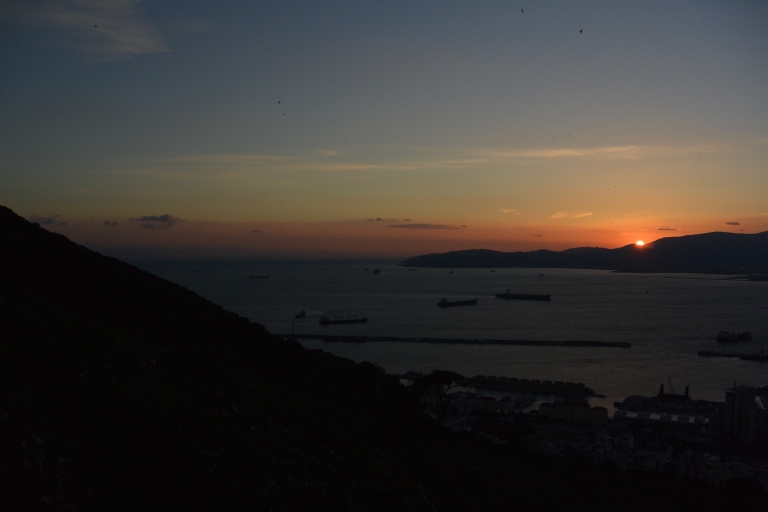 I stayed a couple of hours enjoying the view. 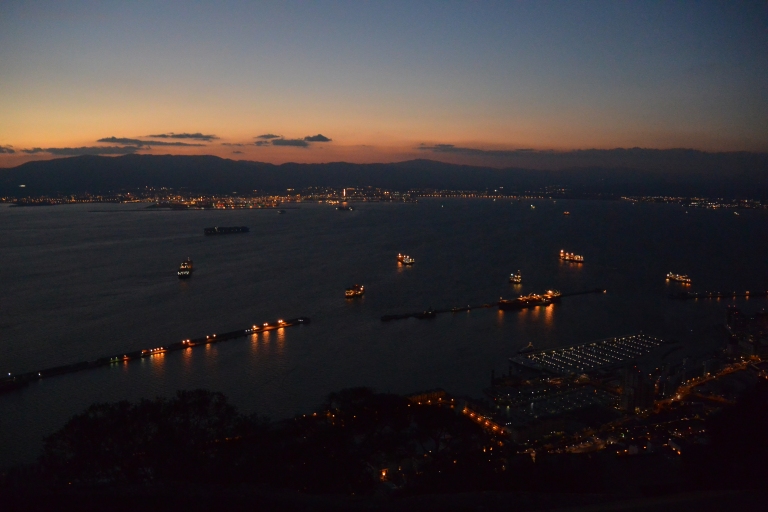 Then I met my host from Romania and went to sleep, exhausted.

Next morning, we had breakfast downtown in La Linea de conception. This is where Ovidiu lives.
This is the cheapest city of Spain and it is just few meters away from the most expensive place, Gibraltar. Most of people living there work in Gibraltar to get higher salary. 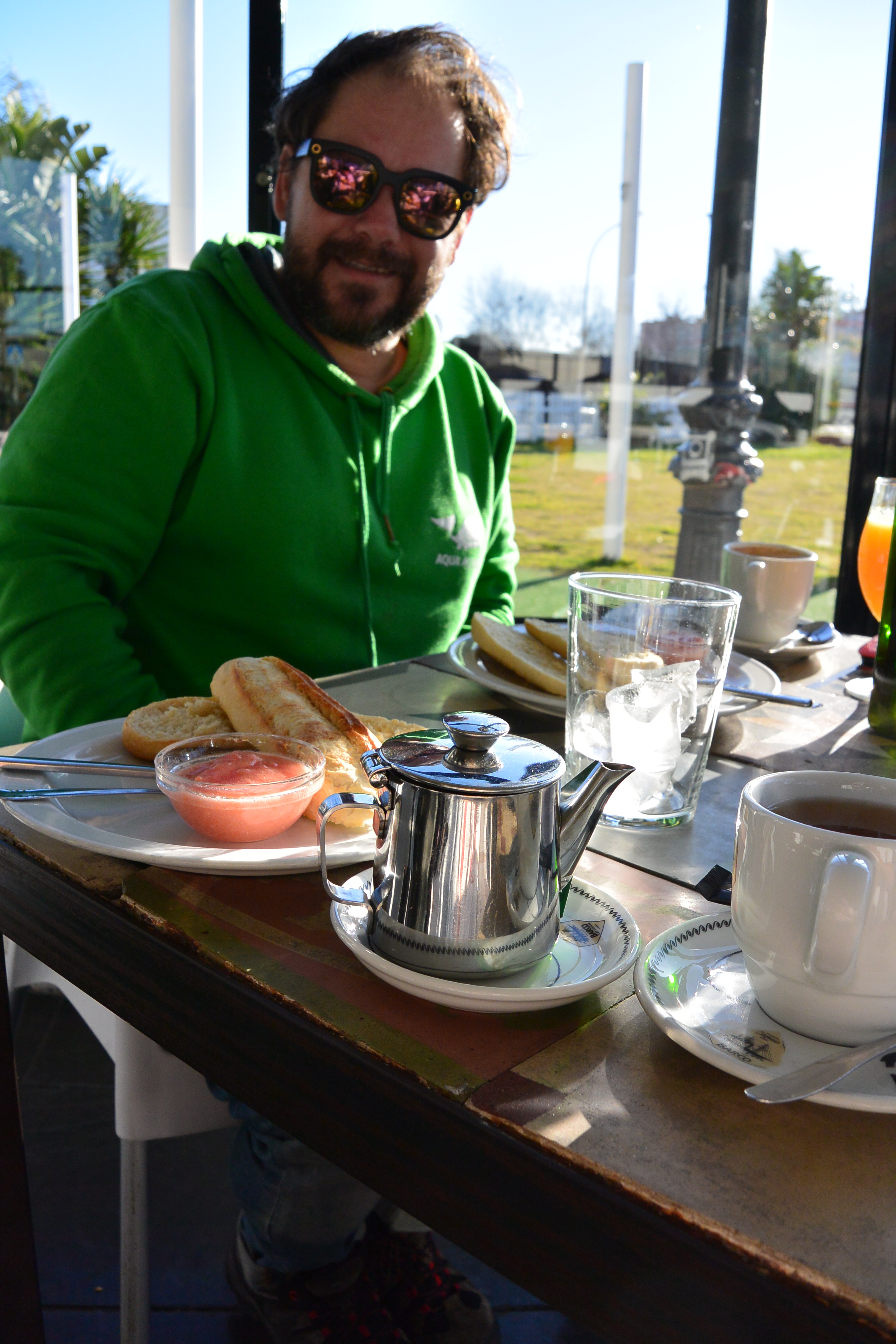 Ovidiu was working in a gambling company and is also a guide of the city… how cool is that ? 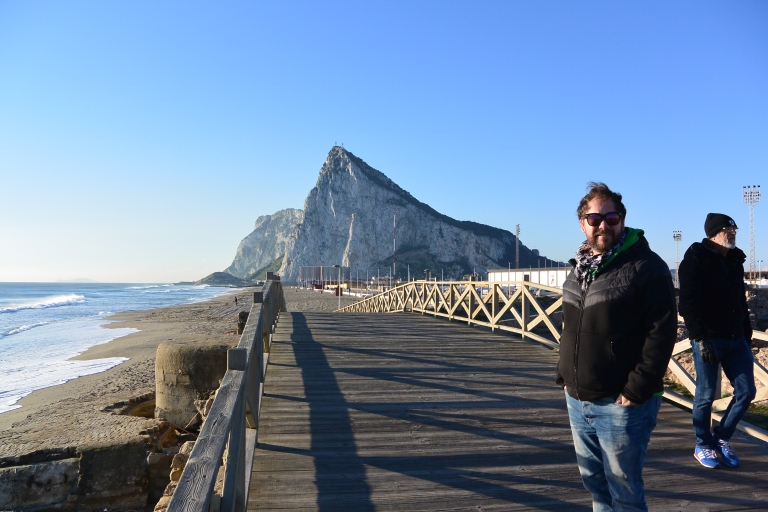 We went by foot to his workplace and I kept visiting Gibraltar for a bit. I also visited marinas to get information about how to cross the straight of Gibraltar and the best way to reach Canaries islands by sailboat.

I walked the rest of the day all around the rock. 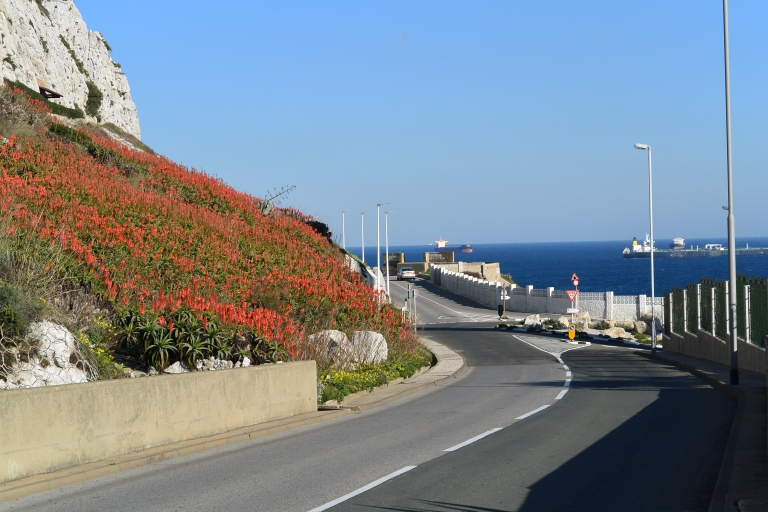 And finally I saw monkeys, but not where I was expected too. 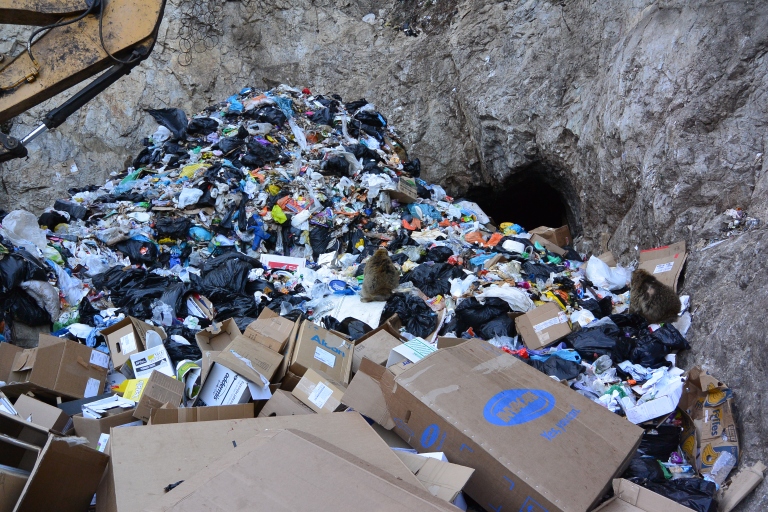 I met my friend Ovidiu at night and went out with all his friends from Italia, Romania, Hungary and Spain…

That concluded my time in Spain. Thanks so much for those pictures, Ovidiu.

9 thoughts on “At the edge of Europe”